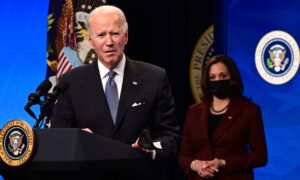 President Joe Biden said Monday that Americans should expect to deal with the pandemic through the early fall of 2021.

“I’m going to shut down the virus, but I never said I’d do it in two months,” Biden told reporters before adding: “It’s going to take a heck of a lot of time.”

He was responding to a question from a reporter who asked the president about whether he was fulfilling his campaign promise to shut down the CCP virus after being elected.

The president said that it would take longer to combat the virus via lockdowns and other restrictions, while he noted that vaccinations for most people take at least two weeks.

“We’re still going to be dealing with this issue in the early fall,” he said, noting: “We’re in this for a while.”

During the 2020 campaign, Biden made defeating the CCP virus pandemic a key promise and often criticized former President Donald Trump for not doing a good enough job in combatting the pandemic.

However, in recent days after taking office, Biden acknowledged that it will take much longer to combat the virus and predicted hundreds of thousands of more American deaths.

“If we fail to act, there will be a wave of evictions and foreclosures in the coming months as this pandemic rages on, because there’s nothing we can do to change the trajectory of the pandemic in the next several months,” Biden said last Friday. The comments drew critical comments from Republicans in Congress and a variety of commentators.

Biden’s Health and Human Services nominee Xavier Becerra tried to clarify Biden’s remarks, saying on CNN’s “State of the Union” that “I believe President Biden made it very clear, the plane is in a nosedive, and we gotta pull it up. And you’re not going to do that overnight.”

He added: “But we’re gonna pull it up, we have to pull it up. Failure’s not an option here, and so we will.”

The president made the remarks Monday as he acknowledged that it might not be possible to include $1,400 stimulus payments and checks in the next COVID-19 relief bill. Biden last week proposed a $1.9 trillion stimulus package to combat the economic downturn caused by lockdowns and layoffs.

“We’re going to have arguments. For example, I proposed that, because it was bipartisan it would increase the prospects of passage, the additional $1,400 in direct cash payments to folks,” Biden said. “Well there’s legitimate reason for people to say, ‘Do you have the lines drawn the exact right way? Should it go to anybody making over ‘X’ number of dollars?’ I’m open to negotiate those things.”