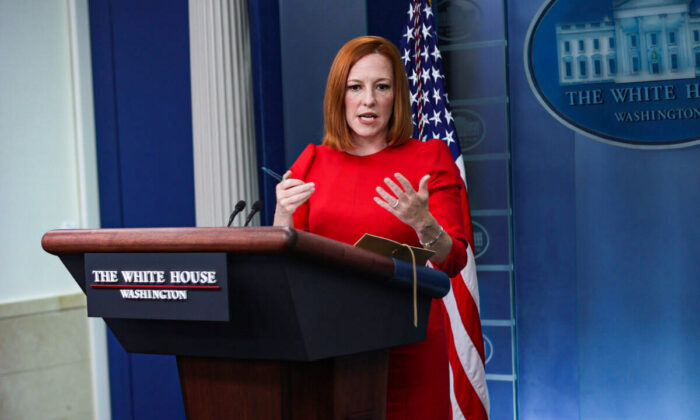 Biden Has Been ‘Struck’ by Trump’s ‘Hold’ on Republican Party: Psaki

President Joe Biden has been “struck” by the influence that former President Donald Trump holds over the Republican Party, according to White House press secretary Jen Psaki.

Her comment comes a day after two candidates endorsed by Trump—J.D. Vance and Max Miller—won in Ohio Republican primaries.

Vance secured a victory in the Ohio Republican Senate primary on May 3. The race was the first sign of Trump’s influence in the midterm elections in November.

“JD represents the future of the conservative movement, as a coalition of working people, families, and people of faith, welcoming every American who believes in this nation. On to victory in Nov!,” Hawley wrote.

Currently, the U.S. Senate is split 50–50 between Republicans and Democrats. In November, Ohio voters will choose a successor to GOP Sen. Rob Portman, who decided against running for reelection.

Max Miller, a former aide to Trump, won the GOP primary for Ohio’s 7th Congressional District in a May 3 primary. The district is reliably Republican.

Aside from Vance and Miller, pro-Trump candidates Jennifer-Ruth Green and Erin Houchin won Republican primaries in Indiana’s 1st and 9th Congressional Districts, respectively, on May 3.

Earlier on May 4, Biden harshly criticized MAGA supporters, characterizing the “MAGA crowd” as the “the most extreme political organization that’s existed” in recent American history. The president made the remark during a speech on the U.S. economy.

Biden also criticized “MAGA” Republicans, who he asserted want to raise taxes on millions of working-class Americans while protecting billionaires and big corporations.

After his speech, Biden was asked about the leaked draft opinion penned by Supreme Court Justice Samuel Alito, which indicates that the nation’s top court has decided to undo the 1973 Roe v. Wade decision. If undone, it would return the power to decide abortion policy to state governments.

“This is about a lot more than abortion,” Biden said, before reflecting on the Supreme Court’s confirmation process for Robert Bork in 1987, who was nominated by President Ronald Reagan to be an associate justice at the U.S. top court. At that time, Biden was chairman of the Senate Judiciary Committee.

“This reminds me of the debate with Robert Bork. Bork believed the only reason you had any inherent rights was because the government gave them to you,” Biden said. “When I was questioning him as the chairman, I said, ‘I believe I have the rights that I have not just because the government gave them to me, which you believe, but because I’m just a child of God; I exist.’”

The issue of abortion also came up during Psaki’s daily briefing on May 4.

When asked if Biden thinks the states should have the right to determine the issue of abortion, Psaki said, “The president believes that it should continue to be federal law, that women have the right to make choices with their doctors, as it has been for 50 years.”