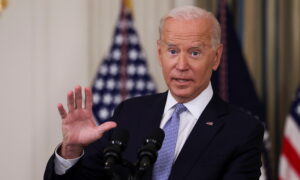 Biden: Booster Shots Should Be Available 'Basically Across the Board' in the Future
0
Share Now
TelegramFacebookTweetEmailTellMeWeReddit
Copy Link 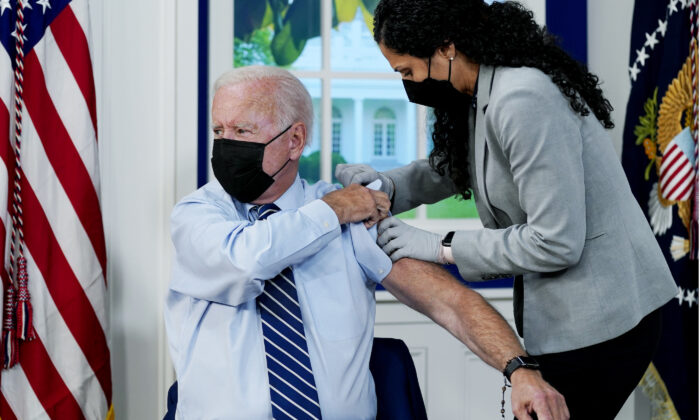 President Joe Biden receives a COVID-19 booster shot during an event in the South Court Auditorium on the White House campus in Washington on Sept. 27, 2021. (Evan Vucci/AP Photo)
Executive Branch

President Joe Biden received his COVID-19 vaccine booster shot on camera in the White House Monday just days after a third dose was recommended for certain groups by a CDC advisory committee.

Before receiving the injection, Biden continued to cast blame on those who have yet to get the shot, which he says now make up about 23 percent of the population.

The booster shot is meant to be taken 6 months after the two-shot primary series. Pharmacies are instructed to administer the booster shots based on the self-attestation of those who say they qualify to get one.

“There will be temptations, for example, for people who recently got vaccinated to not wait for the six-month period of time,” said infectious disease specialist Dr. Anthony Fauci. “There’s an immunological reason why it’s important to wait, because you know if you allow the immune response to mature over a period of few months, you get more of a bang out of the shot, as it were, in enhancement of your antibodies.”

Plans for booster shots were announced back in August by eight top government doctors noting clear evidence the COVID-19 vaccine effectiveness decreases over time. The Biden administration then laid out plans to begin giving booster shots to Americans with the goal of starting Sept. 20.

On Sept. 17, an FDA advisory committee voted 16–3 against providing the booster for most people, but recommended it for those over 65 years old and those at high risk. The CDC committee made a similar recommendation last week.

There was some fallout in the approval process. Two top vaccine officials within the FDA, Dr. Marion Gruber, the director of the FDA’s Office of Vaccines Research and Review, and her deputy, Dr. Philip Krause, announced late last month their plans to leave the agency in October and November.

The two co-authored a paper released in the scientific journal The Lancet saying that booster shots may only be appropriate for certain at-risk populations.

The article reads, “although the benefits of primary COVID-19 vaccination clearly outweigh the risks, there could be risks if boosters are widely introduced too soon, or too frequently, especially with vaccines that can have immune-mediated side-effects … If unnecessary boosting causes significant adverse reactions, there could be implications for vaccine acceptance that go beyond COVID-19 vaccines. Thus, widespread boosting should be undertaken only if there is clear evidence that it is appropriate.”

Earlier this month, Biden issued an executive order requiring all federal employees to receive the vaccine and calling for a new OSHA rule to fine businesses with more than 100 employees unless they require their workers to be vaccinated or get weekly COVID-19 tests.

Biden is scheduled to travel to Chicago Wednesday to promote this plan and ask more businesses to put vaccine mandates in place.