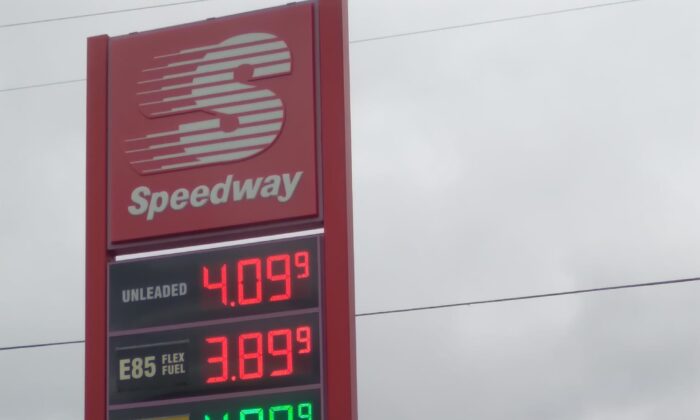 For the first time since 2008, gas prices rose to more than $4 a gallon since 2008. Here, on March 7, gas at a Speedway station in Brookville, Ohio, near Dayton, was $4.09 a gallon. The British Petroleum (BP) station across the street was cheaper at $3.71, but the next day, went up to $4.09 a gallon, too. (Michael Sakal/The Epoch Times)
Executive Branch

Biden: Gas Prices Are ‘Going to Go Up’, ‘Can’t Do Much’ About It

President Joe Biden says gas prices in America that are already at historical highs are going to continue to go up and that there’s not much that can be done about it at this time.

On Tuesday the president announced a ban on Russian energy imports as the latest move from the United States to isolate Russia’s economy in response to its invasion of Ukraine.

Later in the day, as Biden landed in Texas, a reporter asked for his message to the American people on gas prices, which reached a record $4.173 on Tuesday, according to the American Automobile Association (AAA).

“They’re going to go up,” said Biden of the prices.

When asked what he can do about it, the president responded: “Can’t do much right now … Russia is responsible.”

Gas prices have been on the rise ever since dropping below $2.00 a gallon during the COVID lockdown measures in 2020. Those increases have accelerated since around the start of 2022 as Russian tensions with Ukraine escalated and Russia later invaded.

Biden has moved to release a total of 90 million barrels of oil from the Strategic Petroleum Reserve this fiscal year, but that amounts to a drop in the bucket as the United States consumes an average of about 20 million barrels per day. The national average price of gas has increased by more than 71 cents over the past month, according to AAA.

“Americans are paying a higher price at the pump because of the actions of President Putin,” said White House press secretary Jen Psaki Tuesday aboard Air Force One. “This is a Putin spike at the gas pump, not one prompted by our sanctions.”

Some members of Congress have called for the United States to increase its domestic oil production as a means of stabilizing gas prices, though this would run counter to the Biden administration’s effort to move the United States away from fossil fuels.

But the White House has since repeatedly denied its policies are limiting oil production, pointing to an increase of production compared to President Donald Trump’s first year in office and 9,000 unused permits for oil companies to drill on federal land.

“They have 9,000 permits to drill now. They could be drilling right now, yesterday, last week, last year. They have 9,000 to drill onshore that are already approved,” President Joe Biden said of U.S. oil companies Tuesday as he announced the ban on Russian oil imports. “So let me be clear—let me be clear: They are not using them for production now. That’s their decision. These are the facts. We should be honest about the facts.”

“We’ve actually produced more oil, it is at record numbers, and we will continue to produce more oil. There are 9,000 approved drilling permits that are not being used,” Psaki said on Monday. “So, the suggestion that we are not allowing companies to drill is inaccurate.”

But American Petroleum Institute spokesman Kevin O’Scannlain calls this argument “a red herring, a smokescreen for energy policies that have had a hamstringing effect” on U.S. natural gas and oil production.

O’Scannlain says the White House is mischaracterizing the way leases work. He points to “use it or lose it” requirements that oil companies produce gas or return leases to the federal government. He also notes the significant time and financial investment needed to lease land and search for oil, as well as federal limits on companies locking up excess unproductive land.

Kathleen Sgamma of Western Energy Alliance called Psaki’s comments a “cynical attempt to deny the effects of the president’s own ‘no federal oil’ policies.”

Sgamma says many lease are held up by environmentalist groups and federal red tape.

Since before Russia decided to invade Ukraine, the White House has said it was in discussions with large oil producers around the world to negotiate ways to stabilize the energy market. These have included Saudi Arabia, Iran, and Venezuela.

Reports from over the weekend were later confirmed by the White House that high-level Biden administration officials were travelling to Venezuela to meet with the regime of socialist dictator Nicolás Maduro.

“Instead of witnessing his border crisis or meeting with American energy producers, Biden would rather buy oil from terrorist regimes and let millions of illegal immigrants flow into the country,” the statement reads. “Americans are paying for Biden’s abject failure.”

Biden travelled to Texas Tuesday with a bipartisan group of lawmakers to meet with veterans groups and deliver remarks on veterans’ health.