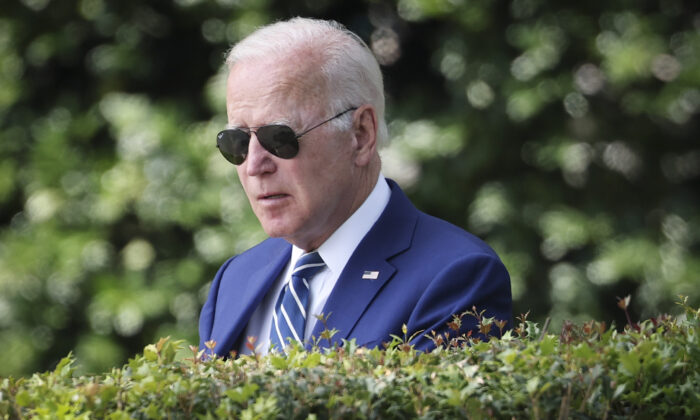 Biden Fires Back at Reporter, Argues Democrats ‘Want Me to Run’ in 2024

President Joe Biden disputed a question from a reporter after he was asked about reports and polls suggesting Democrat voters don’t want him to run for reelection.

“Mr. President, what’s your message to Democrats who don’t want you to run again?” the unnamed reporter asked him at the White House on Tuesday.

In response, Biden paused and said that “they want me to run” and called on the reporter to “read the polls.” The journalist said that two-thirds of Democrats surveyed in a New York Times poll said they don’t want Biden to run in 2024.

“Read the poll. Read the polls, Jack, you guys are all the same,” Biden said as he walked closer to the reporter. “That poll showed that 92 percent of Democrats, if I ran, would vote for me.”

Biden was possibly making reference to the left-wing newspaper survey’s finding that 92 percent of Democrats would vote for Biden in a hypothetical rematch between him and former President Donald Trump in 2024. The survey said that more than 64 percent of Democrat voters under the age of 30 want someone else to run.

White House press secretary Karine Jean-Pierre also made reference to the 92 percent figure during remarks to reporters on Monday.

But some Democrat-aligned strategists have sounded the alarm for the 2022 elections. The party of the president generally loses seats in the midterms, while Democrats currently have thin majorities in both the House and Senate.

“Democrats haven’t done things they promised,” Connor Farrell, who founded the Democrat-aligned group Left Rising, told The Hill on Tuesday. “In this environment, the best general election candidates will be bold [ones] that can distinguish themselves from what we’re getting from the White House.”

“Democratic leadership should look no further than the fact that they need to wake up and step up to the plate,” Jon Reinish, managing director at the political strategy firm Mercury, told the outlet. He did not elaborate what that might entail.

Elected Democrats, he said, are “not just losing Independents or you know, Never-Trump Republicans,” but “they’re losing their own voters. Democrats’ own voters don’t feel as if their leaders hear their concerns.”

It comes as the Bureau of Labor Statistics revealed that year-over-year inflation reached 9.1 percent in June, representing the highest figure since November 1981. Republicans have already shaped their 2022 messaging around the economy, saying that Biden’s policies contribute to the high prices.