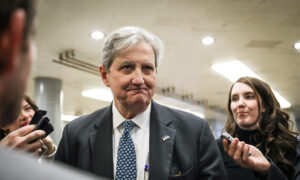 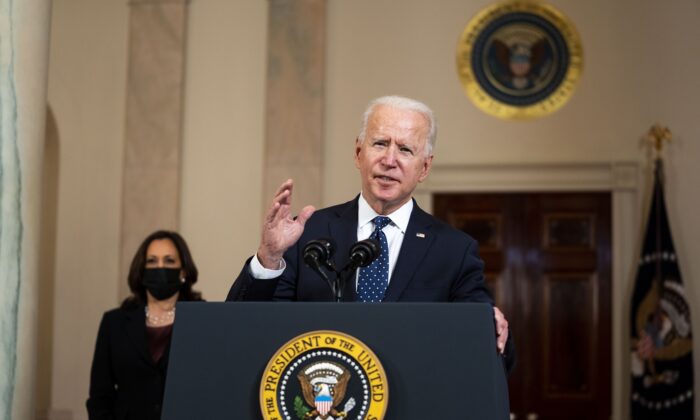 WASHINGTON—President Bill Clinton in 1996 signed welfare reform into law, fulfilling his campaign promise to “end welfare as we know it.” A quarter-century later, advocates of that overhaul effort accuse the Biden administration of seeking to overturn the bipartisan accomplishment, calling its proposal an “attack” on the U.S. welfare system.

A majority of both Democrats and Republicans voted for the reform bill in 1996 in an effort to break what they termed a culture of poverty and dependence. Ten years after signing the legislation, Clinton took a victory lap to declare welfare reform a “great success,” in a New York Times op-ed.

The reform law ended more than 60 years of guaranteed cash assistance begun under President Franklin Roosevelt’s New Deal. It turned a dysfunctional cash welfare program into an effective jobs program for the poor, according to conservatives who now blame President Joe Biden for reintroducing a culture of dependence.

“The welfare reform of the mid-1990s was the culmination of a long and unhappy period of lessons learned,” according to Nick Eberstadt, political economist at the American Enterprise Institute, a conservative think tank.

“The attack on welfare reform that we see today can only happen because those lessons have been forgotten,” he told The Epoch Times.

The Biden administration significantly expanded the child tax credit for the 2021 tax year and announced its intention to make it permanent policy moving forward.

The credits would also be “fully refundable,” providing an unconditional cash transfer rather than a credit against taxes paid. So this makes the benefits available to nonworking families as well.

While Biden’s plan could raise millions of children above the poverty line, conservatives say making it permanent policy has trade-offs in the long run, such as expanding the role of government, discouraging work, and lowering labor force participation.

“Their design has been to essentially create an alternative program, which is virtually identical to the old welfare program and has no work requirements. That’s what this child allowance is,” Robert Rector, senior research fellow at the conservative Heritage Foundation, told The Epoch Times.

Welfare reform ended the unpopular cash assistance program, Aid to Families with Dependent Children (AFDC) that dated back to the New Deal. It was established by the Social Security Act of 1935 as a federal grant program to help states provide direct cash aid to low-income families with children.

However, critics argue that AFDC discouraged work, subsidized non-marital childbearing, and encouraged single parenthood, ending up disadvantaging the vulnerable children and mothers it was meant to help.

Before the Clinton reform, 1 in 7 children in the United States was on the AFDC program, Rector said.

“Nearly all of those families were poor because the welfare wasn’t enough to bring them out of poverty, but, more importantly, the typical family in that program spent at least 14 years on welfare,” he added.

The welfare reform of 1996 replaced the AFDC with a program called Temporary Assistance for Needy Families (TANF), which provided a block grant to states to operate their own cash welfare programs. The key feature of the 1996 reform was that the block grants to each state were finite, not based on a matching formula, so the federal government didn’t pay the states to increase welfare rolls, as with AFDC.

In addition, TANF established a work-focused program, requiring welfare recipients to work in order to receive benefits. It also introduced a time limit on the receipt of the assistance.

Clinton’s reform law was opposed bitterly by progressives who believed the work requirements were too harsh, especially for young mothers. Some called it “a cruel monstrosity,” “an unconscionable retreat,” and “a moment of shame.”

Critics argued that while welfare reform assisted poor families with incomes, it did less to help families in deep or extreme poverty.

Clinton, however, hailed the accomplishments of welfare reform in his op-ed, stating that it created “a new beginning for millions of Americans.”

Welfare rolls dropped substantially to 4.5 million in 2006, from 12.2 million in 1996. In addition, 60 percent of mothers who left the welfare program found a job.

According to Rector, the black child poverty rate, which had been constant for about a quarter of a century, “just dropped like a stone,” as a result of welfare reform.

Bob Carleson, a welfare reform pioneer and President Ronald Reagan’s top policy adviser, had advocated for repealing the AFDC program and replacing it with a system of block grants. His ideas were instrumental in shaping the 1996 federal welfare law.

Carleson helped then-Gov. Reagan to reform California’s welfare system in 1971 and save the state from bankruptcy.

The welfare reform of 1996 was a true American success story, according to Susan Carleson, chairman and CEO of the American Civil Rights Union and Bob Carleson’s widow.

“It was a reversal of socialism for the first time ever,” she said.

The reform, however, has been under assault for a long time, according to Carleson.

The welfare caseload during the Obama administration surged considerably. Welfare also expanded during the George W. Bush administration, with the proportion of households receiving food stamps or other assistance increasing 36 percent.

Conservatives fear that the Biden administration’s broader agenda is to introduce unconditional benefits for all.

“There is a view, certainly held by a number of people in the current administration, but it’s also gaining popularity in academic and progressive political circles more generally, that the United States should be moving toward a universal basic income, towards an unconditional income guarantee,” AEI’s Eberstadt said.

Biden is expected to propose extending the fully refundable child tax credit in his “American Families Plan” this week. And he will lay out the details of his package during his address to a joint session of Congress on April 28, according to the White House.

According to some estimates, the relief plan “will reduce child poverty by 50 percent,” he added.

“We’ve not had that kind of poverty reduction ever in our history for children,” he told The Epoch Times.

Garfinkel said if Biden makes the child allowance permanent, it would be as important a development as Roosevelt’s New Deal and President Lyndon Johnson’s Great Society.

Garfinkel agrees with conservatives on placing a high value on work, although he parts ways with them on the issue of making it a requirement. He believes that the fears that Biden’s plan would increase welfare dependence are, in the long run, not based in reality.

“It is the case that if you have a child allowance, there will be some decline in work, there will be an income effect, but it is small, very small,” he said. “It’s virtually so close to zero, that it’s even hard to detect statistically, so I don’t share their nightmare.”

Garfinkel also criticized conservatives for giving all the credit in terms of poverty reduction to the 1996 welfare overhaul.

“The scientific evidence is very clear that it gets no credit in terms of poverty reduction,” he said.

It’s the Earned Income Tax Credit (EITC) expansion in 1993 and the good economy that led to the reduction in poverty rates, not welfare reform, he argues. EITC is a refundable income tax credit for low-income working taxpayers.

Eberstadt rejected the claims that welfare reform had no effect on poverty.

“There was no similar transition from welfare to work during the economic boom periods of the 1960s and the 1980s. While the U.S. had very strong economies in the ’60s and the ’80s, it had continuing increases in welfare dependence for single-parent families,” he said.

“So good economies before welfare reform didn’t make this transition. That has to be explained.”