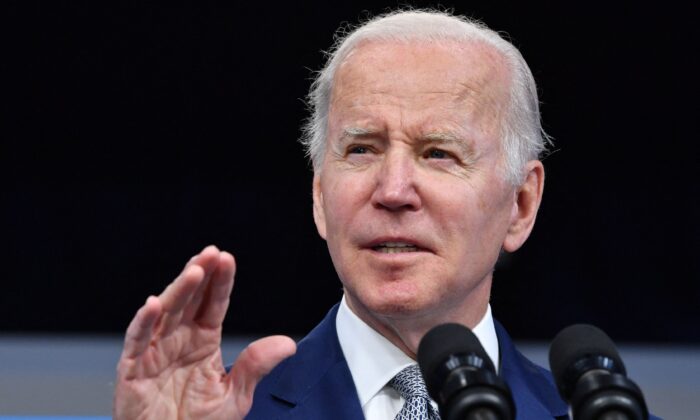 President Joe Biden speaks about his plan to fight inflation and lower costs for working families, in the South Court Auditorium of the White House in Washington, on May 10, 2022.. (Nicholas Kamm/AFP via Getty Images)
Policies & Impacts

Biden’s comments came during a taping of ABC’s “Jimmy Kimmel Live!” on June 8. Kimmel, a comedian and left-wing activist who is an outspoken supporter of Obamacare, gave the president a softball interview that was punctuated with applause by the studio audience.

The face-to-face conversation was reportedly Biden’s first major media appearance since 118 days before, when he sat down with NBC’s Lester Holt on Feb. 10 before the Super Bowl.

The TV spot came five weeks after a leaked draft majority opinion indicated the Supreme Court was poised to reverse Roe v. Wade, the seminal 1973 precedent that federalized abortion policy, overriding the states and making the procedure lawful throughout the entire United States. The draft opinion was from a pending case from Mississippi: Dobbs v. Jackson Women’s Health Organization.

Biden told Kimmel that if the Supreme Court overturns Roe v. Wade, “I think we have to legislate it. We have to make sure we pass legislation making it a law that is the federal government says, ‘This is how it works.’”

The abortion ruling is “just going to be the beginning,” Biden said, adding that the Supreme Court would then outlaw the use of contraception “because in the Constitution there was no right to privacy.”

“It’s just ridiculous in my view, and I don’t think the country will stand for it, but I think what we’re going to have to do, there’s some executive orders I could employ, we believe, we’re looking at that right now,” Biden said, without elaborating.

If Roe v. Wade is reversed “and these states impose the limitations they’re talking about, it’s going to cause a mini-revolution and they’re going to vote a lot of these folks out of office,” he said.

“We’ve got to keep it focused on–if they overrule Roe v. Wade and the state of California won’t do it, but other states say that you cannot do the following, and so as a law you can’t cross the border, you can’t–all the things that some states have, then you’ve got to make sure that you vote, you got to vote and let people know exactly what the devil you think and change it.”

Biden’s interview also came the same day a suspect was arrested for plotting to kill Supreme Court Justice Brett Kavanaugh, who, according to the leaked draft opinion, supports overturning Roe v. Wade, and a day after 25 Democratic U.S. senators wrote a letter (pdf) urging the president to “immediately issue an executive order directing the federal government to develop a national plan to defend Americans’ fundamental reproductive rights, including their right to an abortion.”

“The dramatic escalation of attacks on abortion access—spearheaded by right-wing justices, lawmakers, and activists—demands comprehensive and creative strategies from every corner of the federal government,” the letter states.

Among those signing the letter were Elizabeth Warren of Massachusetts, Dianne Feinstein of California, Sherrod Brown of Ohio, Ron Wyden of Oregon, and Bernie Sanders of Vermont, an independent who caucuses with the Democrats.

The Supreme Court is scheduled to release opinions in pending cases on June 13 and 15. It’s unclear which opinions will be made public. Activists are planning to blockade the Supreme Court building on June 13 in hopes of preventing the court from functioning, as The Epoch Times has reported.