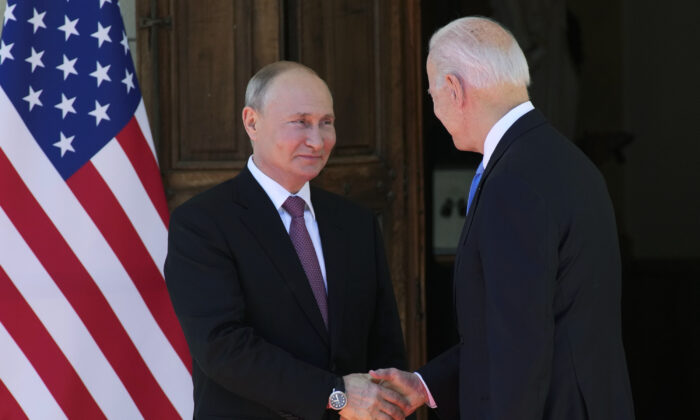 Biden Expected to Threaten Economic Sanctions on Call With Putin

President Joe Biden is expected to issue a warning to Russian President Vladimir Putin of what the United States would do should Russia decide to invade Ukraine.

And officials say that U.S. response would include economic sanctions.

The two leaders have scheduled a bilateral video call for Dec. 7.

Officials say the leaders will discuss U.S. concerns about Russian military activity on the border of Ukraine.

Biden is also expected to reaffirm support for the sovereignty, and territorial integrity, of Ukraine.

On Dec. 6 White House press secretary Jen Psaki said the U.S. objective is “conveying, diplomatically, that this is the moment for Russia to pull back their military buildup at the border” and that “diplomacy is the right path forward here.”

Psaki said the U.S. will coordinate with its transatlantic partners on a range of economic sanctions should Russia decide to move forward with an invasion of Ukraine.

Biden will speak with key European allies in advance of the call to coordinate their message.

Ukrainian officials have estimated more than 90,000 Russian troops are near its border and in Russian-occupied Crimea.

U.S. officials have said the military buildup, along with a spike in anti-Ukrainian activity on social media, harkens back to a “similar playbook” used by Putin in 2014 when Russia occupied Crimea.

“Our objective, first and foremost, is to prevent the move forward—the military progression that we saw happen in 2014,” said Psaki.

Biden said on Dec. 3 that his administration was “putting together what I believe to be the most comprehensive, and meaningful, set of initiatives to make it very, very difficult for Mr. Putin to go ahead and do what people are worried he may do.”

Putin’s foreign affairs adviser Yuri Ushakov told reporters Dec. 3 that during the call with Biden, Putin would raise his demand for a legally binding agreement that would “exclude any further NATO expansion eastward, and the deployment of weapons systems that would threaten us on the territories of neighboring countries, including Ukraine.”

U.S. officials have said that any call from Putin to deny Ukraine’s inclusion into NATO would be rejected.

Biden and Putin held a bilateral summit in Geneva, Switzerland, in June.

Secretary of State Antony Blinken met with his Russian counterpart Sergey Lavrov in Stockholm on Dec. 2, during the Organization for Security and Cooperation on Europe summit.

Blinken demanded that Russia pull back troops from the border with Ukraine, while Lavrov said that the West was “playing with fire” by denying Russia a say in any further NATO expansion into countries of the former Soviet Union.

Also included in Tuesday’s planned phone discussion will be a range of topics of concern in the U.S-Russia relationship including cyber security and the Iran nuclear deal, officials said.