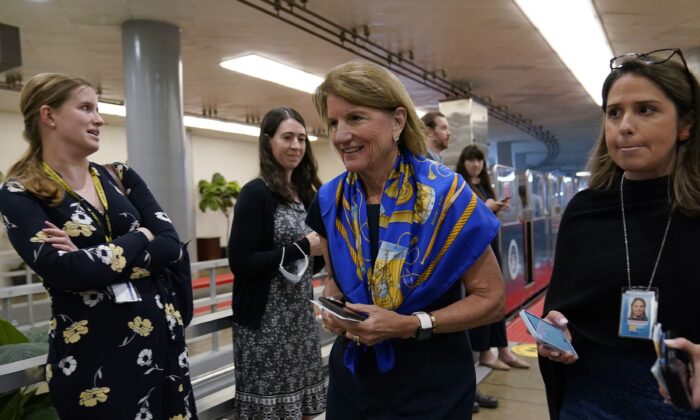 Two days after the Environmental Protection Agency (EPA) released a roadmap on per- and polyfluoroalkyl substances (PFAS), also known as “forever chemicals,” the Senate Committee on Environment and Public Works (EPW) questioned the EPA’s assistant administrator for the Office of Water, Radhika Fox, about how her agency plans to address PFAS, which are still used in firefighting foam for aircraft and in other settings.

“According to the Center for Disease Control, 97 percent of us carry PFAS inside of our bodies,” committee Chairman Tom Carper (D-Del.) said in his opening remarks. “Several of these forever chemicals have proven to be toxic, causing, among other maladies, liver damage, thyroid disease, fertility problems, immune issues, and even cancer.”

The roadmap sets timelines for issuing new regulations but doesn’t itself set standards.

Capito voiced concerns about the new PFAS roadmap, saying it “touches on a whole host of EPA offices and statutory authorities” and that details on timing and other issues are “vague and several years down the line.”

Fox later told Capito, the ranking Republican on the panel, that the agency takes so long to release regulations because it “has to follow the science” along with the law.

“We intend to propose a rule by the fall of 2022,” said Fox, who noted that EPA hoped to beat its March 2023 statutory deadline. “We will take ample public comment. It’s such an important rule, we have to get it right.”

“We are aiming to have that rule in place by 2023,” Fox said. “Please know, we are moving with all deliberate speed.”

In response to later questioning from Carper, Fox said that EPA Administrator Michael Regan had charged the authors of EPA’s new PFAS roadmap to “use every statutory authority that you currently have.”

Sen. Jim Inhofe (R-Okla.) conveyed what he said were concerns from the nation’s commercial aviation community, which still relies on PFAS-based firefighting foam to suppress fires.

“They want to be sure that the airport operators are not going to be held responsible for something over which they really have no control,” Inhofe said.

“If FAA [Federal Aviation Administration] or DOD [Department of Defense] are requiring that airport operators are utilizing this firefighting foam, and it then causes contamination that they may be responsible for if PFAS are designated as a hazardous substance under CERCLA [Superfund], it’s really our responsibility as federal agencies to work together to iron out those things,” she said, adding that there is “great progress being made” on alternative fire suppressants that don’t use forever chemicals.

Inhofe asked her: “The problem is, some disaster could happen in the meantime, and these people are out there not being able to answer the question, ‘What happens if we have a disaster and we have material we are not able to use?’ … Have you thought about having some kind of an exemption put in place that could work?”

Fox responded, “I can’t prejudge the outcome of the rule … but I hear you loud and clear on this concern.”

Inhofe’s concerns about airport liability were later echoed by Sen. Tammy Duckworth (D-Ill.), who praises Carper for his role in obtaining $10 billion for PFAS cleanup through the Senate infrastructure bill.

“It will help right the past wrongs of allowing our military families and industrial communities to bear the brunt of toxic chemical dumping,” Duckworth said.

“That $10 billion would be a game-changer for communities,” Fox said.

Asked by Duckworth about the movement away from PFAS-based firefighting foams, Fox said the change would require “a whole-of-government approach,” involving the DOD and FAA.

Republicans on the committee also took the opportunity to question Fox on the EPA’s definition of “waters of the United States” (WOTUS), which has reverted to the pre-2015 standard after the agency abandoned the Trump administration’s Navigable Waters Protection Rule (NWPR).

Fox repeatedly responded by saying that the rule was vacated by two district courts and that the EPA expected to provide its WOTUS Step 1 rule by the end of the year.

“Can you confirm that the EPA has documented evidence of actual environmental damage or harm that was caused by the Navigable Waters Protection Rule?” Ernst asked, after noting she hadn’t seen any data from the Army Corps of Engineers or the EPA documenting such harms or data.

“I am happy to share with you the Army Corps’ data, which is publicly available,” Fox replied.

In an email response to The Epoch Times, a spokesperson from Ernst’s office wrote, “The public Army Corps’ data referenced by Ms. Fox is a list of projects that would have required permits under the 2015 Obama-era rule, but did not require permits under the Navigable Waters Protection Rule. It includes no documented or actual harm as a direct result of the Navigable Waters Protection Rule.”

Fox also told Carper that her agency would benefit from the fiscal year 2022 budget for EPA, which would add over 1,000 new full-time employees and roughly $2 billion more in funding than the previous year’s budget.

“EPA was eviscerated during the Trump administration,” Fox said.