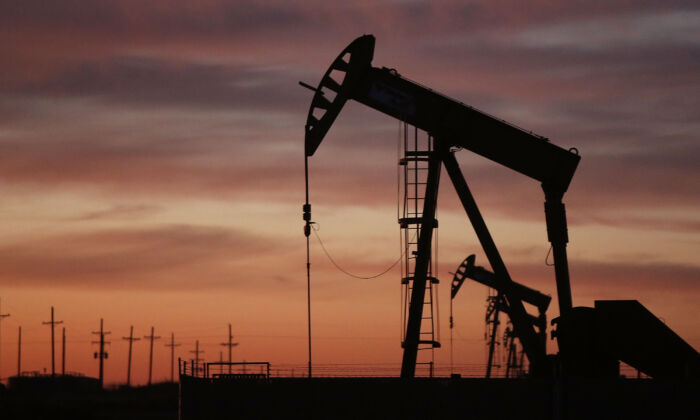 An oil pumpjack works at dawn in the Permian Basin oil field in the oil town of Andrews, Texas, on Jan. 20, 2016. (Spencer Platt/Getty Images)
Executive Branch

The U.S. Environmental Protection Agency (EPA) said it will conduct “flyovers” of the Permian Basin region in Texas and New Mexico to “survey oil and gas operations to identify large emitters of methane” amid the Biden administration’s climate policy initiative.

“The flyovers are vital to identifying which facilities are responsible for the bulk of these emissions and therefore where reductions are most urgently needed,” said Earthea Nance, an EPA official, in an Aug. 1 news release.  The flyovers, which will use infrared cameras, will be conducted until Aug. 15, the agency said.

With the announcement, it means the administration will continue to target the oil and gas industry, coming after President Joe Biden sent letters to the heads of major oil companies in June and threatened to take action to increase supply. The move drew pushback from the CEOs of ExxonMobil and Chevron, who both accused Biden of taking an increasingly hostile approach to the industry.

The Permian Basin accounts for 43 percent of the nation’s oil supply, meaning any federal regulation or rules may impact gas prices nationwide.

“The flyovers will continue through August 15. By emphasizing identification of potential super-emitters, this effort builds on previous aerial surveillance efforts in the Permian Basin area starting in 2019,” the EPA release said.

Its announcement came days after an Associated Press report claimed that 533 gas and oil facilities in the Permian Basin are emitting what it described as excessive amounts of methane. But an EPA spokesperson told the Washington Post this week that the flyovers are not connected to AP’s article.

Republicans are poised to target the EPA’s flyover announcement and blame the Biden administration for causing further pain at the pump.

Several weeks ago, Texas Gov. Greg Abbott, a Republican, warned that an EPA proposal reversing a 2017 decision to designate certain regions in the Permian Basin as compliant with 2015 Ozone National Ambient Air Quality Standards would imperil the U.S. oil supply.

“While you express concern about out-of-control gas prices, your Environmental Protection Agency (EPA) is threatening to increase them even further,” Abbot wrote in a letter to the White House in late June. “The EPA’s process could interfere in the production of oil in Texas which could lead to skyrocketing prices at the pump by reducing production, increase the cost of that production, or do both.

“Your administration’s announced action is completely discretionary. Thus, you have the power to stop it. If you do not, this action alone might serve as a catalyst for economic harm leading to an even deeper reliance on imported foreign energy and a faster economic decline into the pending recession by forcing even more pain for American consumers to pay at the pump,” the governor said.