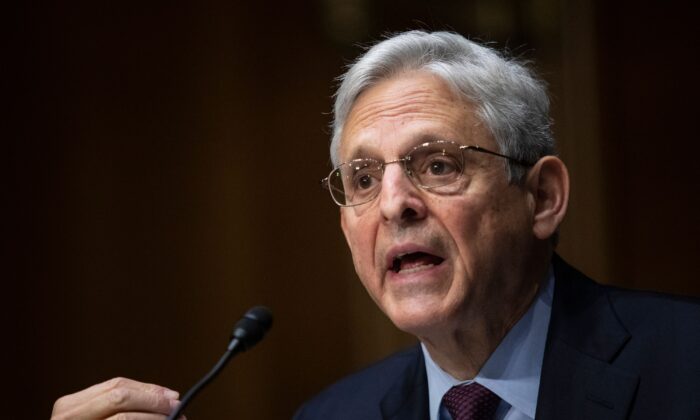 The Department of Justice (DOJ) announced that federal inmates who were released early due to the COVID-19 pandemic can remain at home.

The DOJ order to the Bureau of Prisons reverses a previous decision that would have required many to return back to prison.

“Thousands of people on home confinement have reconnected with their families, have found gainful employment, and have followed the rules,” Attorney General Merrick Garland said in a statement on Tuesday. “In light of today’s Office of Legal Counsel opinion, I have directed that the Department engage in a rulemaking process to ensure that the Department lives up to the letter and the spirit of the CARES Act.”

The DOJ’s Office of Legal Counsel previously had issued an opinion saying the Bureau of Prisons had no legal authority to keep inmates at home once the COVID-19 emergency had subsided.

“We will exercise our authority so that those who have made rehabilitative progress and complied with the conditions of home confinement, and who in the interests of justice should be given an opportunity to continue transitioning back to society, are not unnecessarily returned to prison,” Garland also said. Earlier Tuesday, Garland met with several inmates who were on home confinement.

When Congress passed the CARES Act in 2020, it provided the DOJ more authority to release some low-level federal inmates into home confinement in a bid to ease crowding and reduce COVID-19’s spread across prison facilities.

In April 2021, a Bureau of Prisons union official, Joe Rojas, told Reuters that federal correctional facilities no longer have the staff needed to supervise the thousands of prisoners who were released early and were slated to head back to prison.

“We don’t have the staff,” Rojas, Southeast Regional Vice President at Council Of Prison Locals, told the newswire service at the time. “We are already in chaos as it is as an agency.”

Although Tuesday’s announcement gives the federal prison bureau discretion to keep inmates at home, it doesn’t guarantee that everyone sent home can qualify. Prisoners who violate the agency’s terms and conditions could be sent back.

Garland’s move this week essentially reverses a Trump administration policy that was initiated earlier this year. The Department of Justice had sent out a memo stipulating that inmates who didn’t serve out their sentence during the COVID-19 pandemic would have to return back to prison to do so.

The Bureau “must recall prisoners in home confinement to correctional facilities once that authority expires, unless they would otherwise be eligible for home confinement,” said a Justice Department memo (pdf) released in mid-January 2021, just days before President Joe Biden took office.