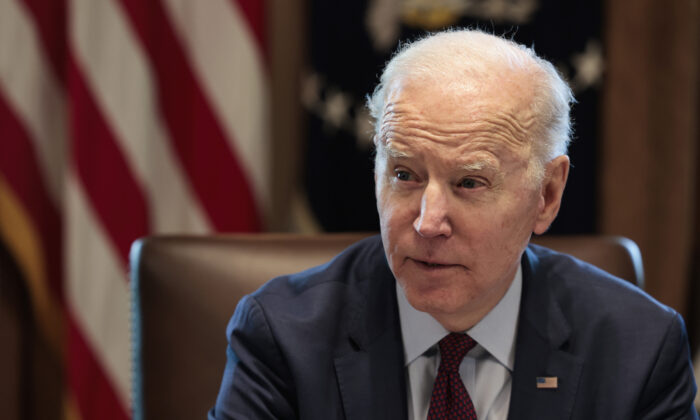 President Joe Biden speaks to reporters before the start of a cabinet meeting in the Cabinet Room of the White House in Washington on March 3, 2022. (Anna Moneymaker/Getty Images)
Executive Branch

President Joe Biden said the United States and NATO should avoid fighting Russia in Ukraine because it would lead to a third world war.

“We’re going to continue to stand together with our allies in Europe and send an unmistakable message. We will defend every single inch of NATO territory with the full might of the united and galvanized NATO,” Biden said after he announced more economic penalties against Moscow on Friday from the White House.

The United States and NATO, he added, “will not fight a war against Russia in Ukraine” because a “direct conflict between NATO and Russia is World War III, something we must strive to prevent.”

Since the start of the Feb. 24 invasion, Russian officials, including Foreign Minister Sergei Lavrov, have warned of Russia’s capabilities as a nuclear weapon-armed nation. Several days after the conflict started, Russian President Vladimir Putin ordered his country’s strategic deterrence forces, which oversees some of the country’s nuclear arsenal, on high alert.

Belarusian President Alexander Lukashenko said in early March that Western sanctions were pushing Russia towards a “third world war,” while Lavrov told Al Jazeera that “World War III will be a devastating nuclear war” in an apparent warning to the United States and NATO.

Ukrainian President Volodymyr Zelensky and other members of Kyiv’s government have called for a NATO no-fly zone over Ukraine, which isn’t a member of NATO or the European Union.

“Don’t wait for me to ask you several times, a million times, to close the sky. You [will] have to phone us, to our people who lost their children, and say ‘sorry we didn’t do it yesterday,'” Zelensky told Sky News on Thursday.

White House and NATO officials have said such an agreement is a non-starter, as that would represent a sharp escalation. Russia has warned that any country that attacks Russian forces in Ukraine would be considered to have entered the conflict.

Instead of getting directly involved, the United States and other NATO members have provided Ukraine’s military and defense forces with weapons, ammunition, intelligence, and supplies. They’ve also hit Russia’s economy with heavy sanctions.

Ukraine on Friday also accused Russia’s military of shelling and bombing cities across the country, including in the little-touched western part of the country.

“Russia is likely seeking to reset and re-posture its forces for renewed offensive activity in the coming days,” Britain’s Ministry of Defense said on Friday. “This will probably include operations against the capital Kyiv.”