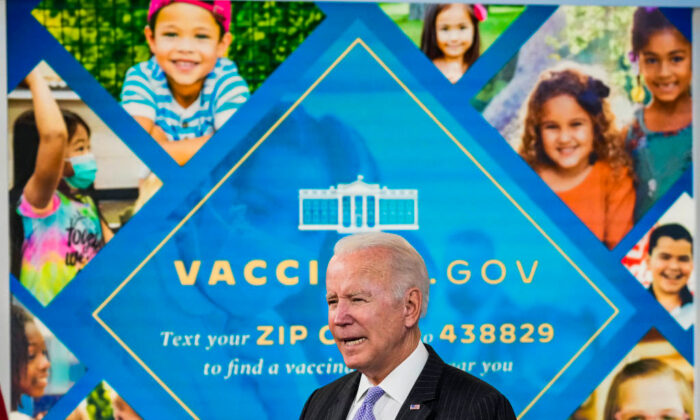 President Joe Biden speaks about the authorization of the Covid-19 vaccine for children ages 5-11, in the South Court Auditorium on the White House campus in Washington, on Nov. 3, 2021. (Drew Angerer/Getty Images)
Executive Branch

President Joe Biden on Wednesday denied reports that his administration is planning to pay $450,000 to families of illegal aliens separated under the Trump administration.

“If you guys keep sending that garbage out, yeah. But it’s not true,” Biden told a reporter who asked a question about the matter on Nov. 3. “That’s not going to happen.”

The Wall Street Journal cited anonymous sources in an article on Oct. 28 that claimed the Biden administration is planning payments as large as $1 million per family to resolve the lawsuits on behalf of the families that crossed the border illegally. According to that report, the government was looking to resolve 940 claims from such families for a total payout of about $1 billion.

The American Civil Liberties Union, which is representing some of the families, noted in a statement responding to Biden’s comments that the president may not have been briefed on the work of his own Justice Department.

“President Biden may not have been fully briefed about the actions of his very own Justice Department as it carefully deliberated and considered the crimes committed against thousands of families separated from their children as an intentional governmental policy,” ACLU Executive Director Anthony Romero said in a statement. “But if he follows through on what he said, the president is abandoning a core campaign promise to do justice for the thousands of separated families.”

The White House did not respond to a request for comment on the ACLU’s claim.

On the day following the Wall Street Journal report, more than 40 Republican lawmakers in Congress sent a letter to executive branch heads demanding answers about the contemplated payouts.

“We are a nation of laws, and our laws must be enforced. Promising tens of thousands of dollars to those who unlawfully entered the United States would not only reward criminal behavior, but it would surely send a message to the world that our borders are open, and or rule of law will not be enforced,” the letter stated.

“If your Administration decides to give out financial compensation to thousands of illegal immigrants in the amount of roughly one-half of a million dollars, you will unilaterally incentivize migrants from more than 150 nations across the world to surge our border.”