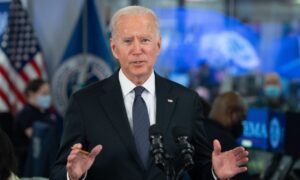 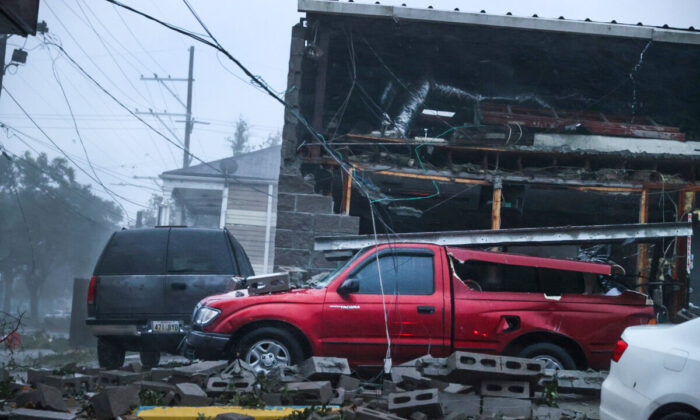 Vehicles are damaged after the front of a building collapsed during Hurricane Ida in New Orleans, La.. on Aug. 29, 2021. (Scott Olson/Getty Images)
US News

President Joe Biden has declared a major disaster as Hurricane Ida continues to ravage parts of Louisiana with powerful winds, leaving more than one million customers across the region without power.

Biden on Sunday night ordered federal assistance to bolster recovery efforts in more than two-dozen storm-stricken parishes, as power was knocked out in the entire New Orleans metropolitan area with the failure of all eight transmission lines that deliver electricity to Louisiana’s largest city, according to utility company Entergy Louisiana.

One transmission tower collapsed into the Mississippi River, according to the Jefferson Parish Emergency Management Department.

According to tracking site PowerOutages.us in its latest update, more than one million customers were without power in Louisiana, and at least 64,000 more had lost power in neighboring Mississippi.

One of the most powerful storms ever to hit the United States, Ida made landfall near Port Fourchon, Louisiana, at around 12:50 p.m. ET on Sunday, according to the National Hurricane Center (NHC), which in its latest update said the hurricane was turning northward over the southeastern region.

Just three days after emerging as a tropical storm in the Caribbean Sea, Ida had intensified into a Category 4 hurricane and swept ashore with top sustained winds of 150 miles per hour (240 km per hour), the NHC reported.

As Ida pushed inland past to New Orleans over the next 10 hours, its maximum sustained winds diminished to 105 mph, ranking it as a Category 1 storm on the five-step Saffir-Simpson hurricane wind scale, according to the NHC.

“The combination of storm surge and rainfall of 6 to 10 inches of rain is creating a life threatening situation. Please move to higher ground!” NWS New Orleans said on Twitter.

Residents of the most vulnerable coastal areas were ordered to evacuate days in advance of Ida.

Meanwhile, at least one person has died from injuries caused by Hurricane Ida. On Sunday night, the Ascension Parish Sheriff’s Office (APSO) said in a statement on Facebook that it received reports hours earlier that a person sustained injuries from a fallen tree in Prairieville, Louisiana.

Deputies arrived and confirmed the victim’s death, the APSO said. It marks the first death reported from the storm.

Cash aid will also be available to state, tribal, and eligible local governments and certain private nonprofit organizations on a cost-sharing basis for debris removal in affected regions, the statement adds.