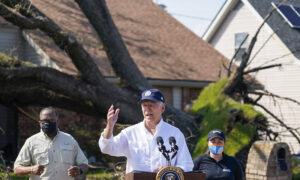 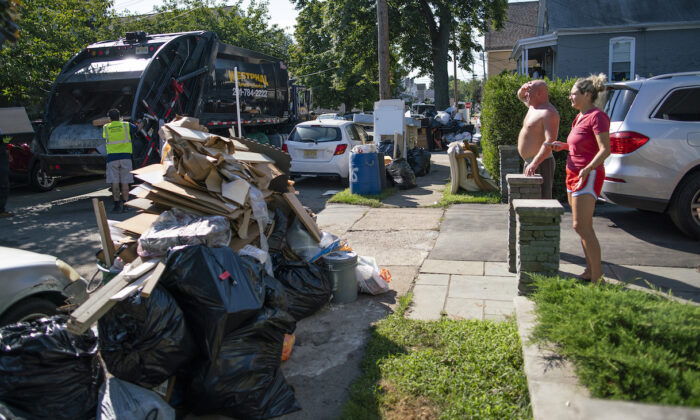 Residents wait a worker picking up debris in Passaic, NJ., from their flood damaged home in the aftermath of Hurricane Ida, on Sept. 6, 2021. (AP Photo/Eduardo Munoz Alvarez)
US News

President Joe Biden has approved disaster funds for New York and New Jersey in the wake of last week’s flooding caused by the remnants of Hurricane Ida, according to the White House in a statement released on Sept. 6.

The disaster funds were released by the federal government to the two states on Sept. 5, according to the statement, after upward of nine inches of rain fell in some areas, triggering widespread flooding.

“The President’s action makes Federal funding available to affected individuals in the counties of Bronx, Kings, Queens, Richmond, and Westchester,” the statement reads. “Assistance can include grants for temporary housing and home repairs, low-cost loans to cover uninsured property losses, and other programs to help individuals and business owners recover from the effects of the disaster.”

Around 50 people died across six states amid heavy rainfall in the wake of the hurricane, which made landfall days earlier in Lousiana as a Category 4 storm, officials told The Associated Press. Thirteen were killed across New York and 27 died in New Jersey, authorities said.

Over the weekend, New York Gov. Kathy Hochul, a Democrat who recently assumed the governor’s position after former Gov. Andrew Cuomo resigned, said in a statement that about $50 million in damage to infrastructure and public property was caused by the storm.

The White House said Biden is scheduled to tour the areas that were hard-hit in New York and New Jersey on Sept. 7.

“It is absolutely crazy/shameful that Hudson County was not included in this list,” the mayor wrote. “We got the storm as bad as any NJ county with higher density in population. I urge you to work with our federal reps to fix this.”

And just days after Ida, more heavy rain is expected to hammer southeastern Louisiana and New Orleans, as the area still grapples with widespread power outages.

Storms capable of producing two to three inches of rain “in a pretty short period of time” were saturating New Orleans and other parts of Louisiana and Mississippi and were expected to continue into the evening, National Weather Service meteorologist Lara Pagano said, Reuters reported.

The storm claimed at least 13 lives in Louisiana. More than 500,000 customers in the state remained without power on Sept. 6, according to the PowerOutage.us website, which tracks power outages.