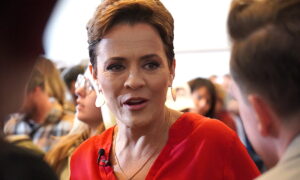 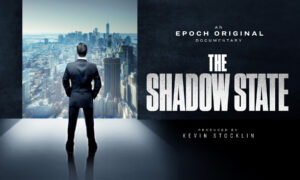 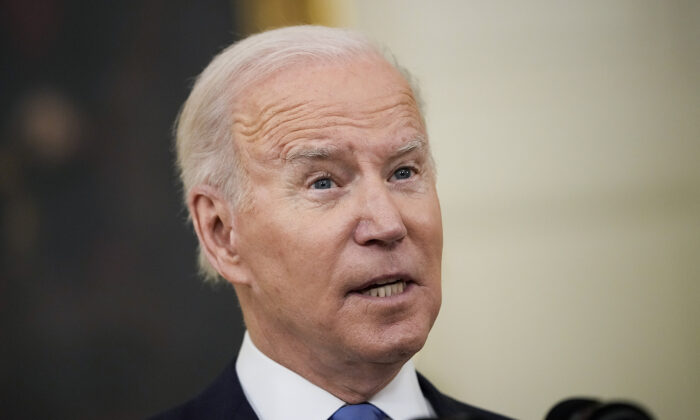 President Joe Biden speaks about the Omicron variant of the coronavirus in the State Dining Room of the White House in Washington on Dec. 21, 2021. (Getty Images)
Executive Branch

Biden: COVID is Not Here to Stay

President Joe Biden continues to promise his administration will get the CCP virus, which causes the disease COVID-19, under control.

When asked by a reporter Friday whether he thinks Americans should prepare to live with COVID-19 forever, Biden responded by saying that the “new tools” the U.S. continues to develop to combat the virus can be used to “contain” it.

“No, I don’t think COVID is here to stay,” Biden said. “Having COVID in the environment and in the world is probably here to stay, but COVID as we’re dealing with it now is not here to stay.”

It also comes a day after a group of six medical experts who served as health advisors during Biden’s presidential transition released an op-ed calling for the administration to “update” its strategy for responding to the pandemic.

The article calls for the redefining of the appropriate national risk level as it relates to COVID-19. This includes scrapping the idea of eliminating the virus entirely and communicating a new strategy for living with the virus to the public.

“The ‘new normal’ requires recognizing that SARS-CoV-2 is but one of several circulating respiratory viruses that include influenza, respiratory syncytial virus (RSV), and more,” the op-ed reads. “COVID-19 must now be considered among the risks posed by all respiratory viral illnesses combined.”

Biden ran on the promise that he would “shut down the virus.” In July, amid declining case totals, he proclaimed that “we’ve gained the upper hand against this virus,” and the Centers for Disease Control and Prevention (CDC) relaxed its COVID-19 guidelines.

It’s now almost a year into Biden’s presidency. And on Wednesday the CDC reported a 98 percent week-over-week increase in cases. Johns Hopkins University also reported the largest single-day total ever on Monday with more than 1 million new cases nationwide.

Some school districts, including Chicago Public Schools, have made the decision to halt in-person learning in response to the outbreak. This despite nearly $130 billion in federal funds from the American Rescue Plan meant to keep schools open.

Biden said Friday that the percentage of open schools has dipped from 98 percent to 90 percent, but still continues to tout his policies.

“We spent the time and the money in the Recovery Act to provide for the ability of schools to remain open,” said Biden Friday.

Biden and the country’s top public health officials continue to push for Americans to get vaccinated against the virus.

The current surge persists despite a 70 percent national vaccination rate.

The CDC made the decision in August to stop keeping track of the total number of “breakthrough” cases of the virus in vaccinated people. But officials have said we are seeing cases among the vaccinated.