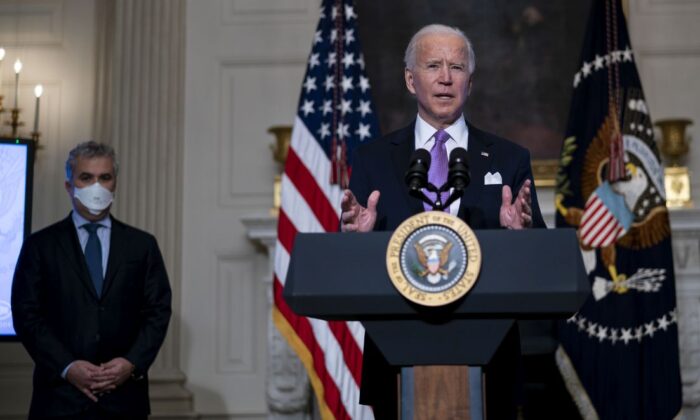 President Joe Biden speaks about the pandemic in the State Dining Room of the White House, on Jan. 26, 2021. (Doug Mills-Pool/Getty Images)
Executive Branch

White House COVID-19 coordinator Jeff Zients said the administration is planning to finalize its vaccine mandate for companies in the near future and claimed the supply chain crunch won’t be worsened, because employees will comply.

The Department of Labor’s Occupational Safety and Health Administration (OSHA) sent the text of the rule, requiring firms with 100 or more workers to be vaccinated or submit to testing, to the Office of Management and Budget (OMB) earlier this month. It came about a month after President Joe Biden announced the coming mandate, which drew significant criticism from Republicans, questions from business leaders about how it would be implemented, and lawsuits.

“The rule will be finalized soon, but we know businesses are already acting,” Zients said during a COVID-19 briefing on Oct. 27.

During the briefing, Zients—who also referenced OSHA having sent text of the rule to the OMB—couldn’t provide a firm timeline on when the OSHA rule would actually be implemented and provided no other details. Biden also announced mandates for federal workers, federal contractors, and most health care staff, with no option for weekly testing.

But in recent weeks, a number of business leaders, the heads of truckers organizations, air cargo groups, manufacturing groups, and retail associations sent warnings to the Biden administration about the mandate. They argued that the rule would exacerbate supply chain bottlenecks and could trigger chaos.

Zients, however, sought to downplay those fears and pointed to high vaccination rates at some companies that have mandated the shots. Tyson Foods, he said, achieved a 96 percent vaccination rate, and he said some airlines have reached more than 95 percent.

“These processes play out across weeks, not days,” Zients said. “We’re creating flexibility within the system. We’re offering people multiple opportunities to get vaccinated, there is not a cliff here. And the purpose, most importantly, is to get people vaccinated and protected, not to punish them, so we do not expect any disruptions.”

Earlier this week, the American Trucking Associations (ATA) issued a sharp warning to the White House about its mandate. And the Air Cargo Association, which represents FedEx and UPS, gave the administration an ominous prediction. FedEx, UPS, and several other carriers are federal contractors, meaning their workers can’t opt out of the vaccine unless they obtain a religious or medical exemption.

Evan Armstrong, a lobbyist at the Retail Industry Leaders Association, told CNBC earlier this week that his organization is concerned that Biden’s rule would trigger a surge in resignations and would cause even more staffing shortages.

“It has been a hectic holiday season already, as you know, with supply chain struggles,” Armstrong said. “This is a difficult policy to implement. It would be even more difficult during the holiday season.”