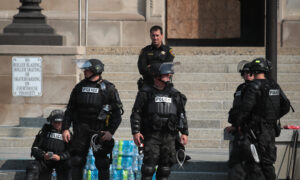 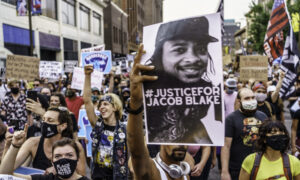 Man Shot by Police in Wisconsin Paralyzed From Waist Down: Father
0 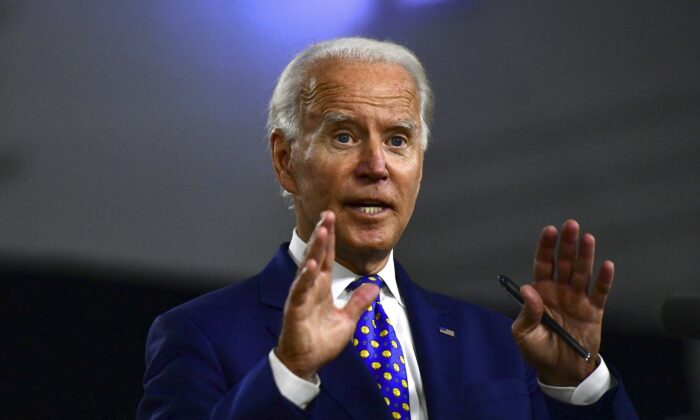 Biden Condemns Kenosha Rioting: ‘Burning Down Communities Is Not Protest’

“What I saw on that video makes me sick,” Biden said in a videotaped post on social media. “Once again, a black man, Jacob Blake, has been shot by the police in broad daylight with the whole world watching.”

He later said he spoke to his family and told them that justice will be meted out.

However, Biden, the former vice president, stipulated that “burning down communities is not protest—it’s needless violence. Violence that endangers lives, violence that guts businesses, and shutters businesses that serve the community. That’s wrong.”

“She looked at the damage done in her community and she said, ‘This doesn’t reflect my son or my family,’” he said. “Put yourself in the shoes of every black father and black mother in this country and ask, ‘Is this what we want America to be?’

“Is this the country we should be?”

Biden, in recent days, has come under pressure to denounce the nationwide wave of violence in the wake of George Floyd’s death in May that led to riots, arson incidents, vandalism, and anti-police sentiment. President Donald Trump has said that if Biden is elected, it would lead to mass anarchy, violence, and further dismantling of police departments.

Trump also has said that Democrat-run cities such as Portland, Oregon, and Chicago have seen a wave in crime in the wake of rioting sparked by Floyd’s death.

Democrats must address the rioting, otherwise, they will lose in November, CNN anchor Don Lemon said.

“I think Democrats are ignoring this problem, are hoping that it will go away,” Lemon said on Aug. 25. “And it’s not going to go away.”

A video uploaded online appeared to show police officers in Kenosha, located about 65 miles north of Chicago, shooting Blake several times. Earlier, Blake was seen hurriedly walking away from officers who had guns drawn before trying to enter his SUV and appeared to try to grab something from the vehicle.

Other footage appeared to show Blake in a struggle with officers before he walked to his vehicle.

The shooting occurred after officers responded to a domestic incident on Aug. 23. According to police scanner audio, a woman called 911 to report Blake at her home when he wasn’t supposed to be, and that he had taken her keys and wouldn’t give them back. A dispatcher said that Blake had an arrest warrant for sexual assault issued in July.

Following two nights of civil unrest that included arson, vandalism, and riots, two people were shot and killed on the third night.

Kenosha police confirmed that at around 11:45 p.m. on Aug. 25, they responded to “reports of shots being fired and multiple gunshot victims” that resulted in “two fatalities and a third gunshot victim was transported to a hospital with serious but non-life-threatening injuries.”

A 17-year-old male was arrested Aug. 26 in connection with the shooting, police said.

Individuals involved in the shooting were part of groups taking part in “illegal activity” following a curfew, Kenosha Police Chief Daniel Miskinis told reporters. “The result of it was, two people are dead.”

Footage posted online appears to show several people attacking a man before he was knocked to the ground; additional video appears to show a man shooting another man in a Car Source parking lot.