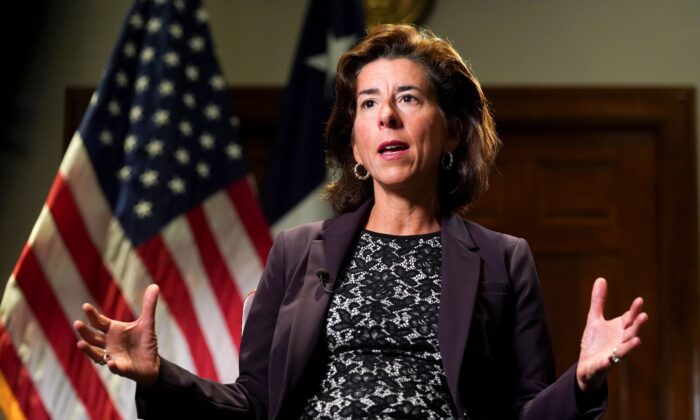 Commerce Secretary Gina Raimondo speaks during a Reuters interview at the Department of Commerce in Washington on Sept. 23, 2021. (Kevin Lamarque/Reuters)
Economy

Biden Commerce Secretary: Delaying Vaccine Mandates Would Be a ‘Mistake’

The Biden administration’s secretary of Commerce signaled that the White House will not delay its vaccine mandate plans until after the Christmas holiday season despite several trade groups’ warnings in recent days.

“No, I think that would be a big mistake. People want to work in a workplace where they feel safe,” Commerce Secretary Gina Raimondo told CBS News on whether it’s needed to delay the administration’s plans to implement COVID-19 vaccine requirements for millions of federal contractors and employees.

Raimondo pointed to United Airlines, which has reported a relatively high vaccination rate among its employees, and claimed that the “number of folks applying for jobs is through the roof,” adding that “the best thing we can do to get people back to work is to make sure everybody’s vaccinated.”

The commerce secretary then argued that the Delta variant of COVID-19 hindered U.S. GDP growth in the third quarter and said that vaccinating workers is the way to deal with economic shortfalls. Raimondo didn’t address recent studies showing that fully vaccinated people can still easily spread the Delta variant.

Nearly two months ago, President Joe Biden announced that he would direct the Occupational Safety and Health Administration (OSHA) to come up with an emergency temporary standard to either mandate vaccines or regular testing for workers at companies with 100 or more employees. Biden also ordered all federal workers, federal contractors, and most healthcare staff to get the vaccine.

But last week, White House COVID-19 response coordinator Jeff Zients suggested that there would not be mass layoffs over the vaccine mandate.

“We’re creating flexibility within the system. … There is not a cliff here,” he remarked during a press conference.

It came as retail, cargo, manufacturing, and trucking groups sent letters to the Biden administration and warned them that his vaccine mandates would imperil the U.S. supply chain.

Among them, the American Trucking Association (ATA) said it has concerns about the mandate for companies with 100 or more employees.

“While much of the country was sequestered in their homes, the trucking industry served its essential function and did so successfully with safety standards developed by public health experts,” ATA President Chris Spear wrote in the letter, before he added that such mandates would create significant staffing shortages. The industry “could lose up to 37 percent of drivers” over firings, attrition to smaller trucking firms, or retirements, Spear added.

The Cargo Airline Association, which represents the likes of FedEx and UPS, offered similar concerns over Biden’s rule for federal contractors. UPS and FedEx both have federal contracts, meaning their workers would be subject to the mandate, which doesn’t allow the option of weekly testing.

“[T]he looming December 8 mandate for having fully vaccinat[ed] workforces creates a significant supply chain problem,” it said in the letter. “This problem is further exacerbated by the fact that we are already experiencing a worker shortage, both in the air and on the ground, and any loss of employees who refuse to be vaccinated will adversely impact needed operations.”

The Epoch Times has contacted the Department of Labor, which oversees OSHA, for comment on Raimondo’s remarks.