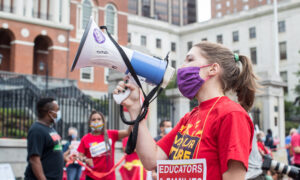 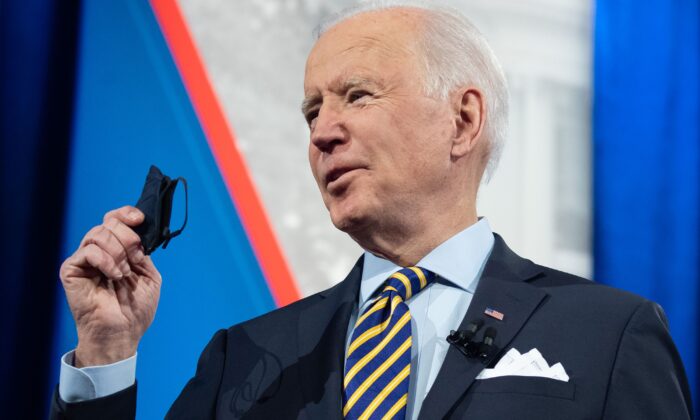 President Joe Biden holds a mask as he participates in a CNN town hall at the Pabst Theater in Milwaukee, Wis., on Feb. 16, 2021. (Saul Loeb/AFP via Getty Images)
Health Education

President Joe Biden on Tuesday evening changed course, saying his aim is to reopen the majority of K-8 schools for in-person learning five days a week within 100 days of his presidency.

“I think we’ll be close to that at the end of the first 100 days,” Biden said during a CNN town hall in Milwaukee. “The goal will be five days a week.”

Just days earlier, White House press secretary Jen Psaki had repeatedly asserted that Biden’s goal is to resume “some teaching” in-person for “at least one day a week” in 50 percent of the nation’s schools by April.

Psaki on Feb. 11 defended the Biden administration’s definition of reopening schools amid the CCP (Chinese Communist Party) virus pandemic following criticism that it had not set the bar high enough.

Biden in December vowed to ensure “a majority of our schools” are open within 100 days of his presidency.

The president on Tuesday evening brushed off Psaki’s recent remarks, saying that it was a “mistake in the communication.”

Schools may also hold classes over the summer months in order for children to catch up on missed learning due to the CCP virus pandemic, Biden suggested.

“My guess is they’re probably going to be pushing to open all summer,” he said.

He listed a number of measures he believes must be taken in order to safely reopen schools for in-person learning, including wearing personal protective equipment such as masks and smaller class sizes.

Teachers should also be prioritized even further for vaccinations against COVID-19, the disease caused by the CCP virus.

“I think we should be vaccinating teachers,” Biden said. “We should move them up in the hierarchy.”

Fauci, the head of the National Institute of Allergy and Infectious Diseases, made the remarks in response to the Feb. 12 guidelines released by the Centers for Disease Control and Prevention (CDC) on the reopening of schools in the United States.

He said he did not believe that schools currently have sufficient resources to follow the updated CDC guidance.

Democrats are attempting to push Biden’s $1.9 trillion relief proposal through Congress, which includes a federal minimum wage hike, a round of $1,400 stimulus checks, and extended unemployment benefits.

The proposal in its current form has little or no GOP backing. According to Reuters, Sen. Mitt Romney (R-Utah) last week said he predicts that “not a single Republican” will support the $1.9 trillion plan.

CDC Director Rochelle Walensky said Sunday that some measures needed in schools in order to mitigate the spread of the CCP virus include more space for children, fewer children in classrooms, more nurses and staff, and screening.