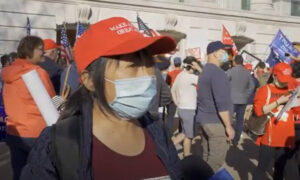 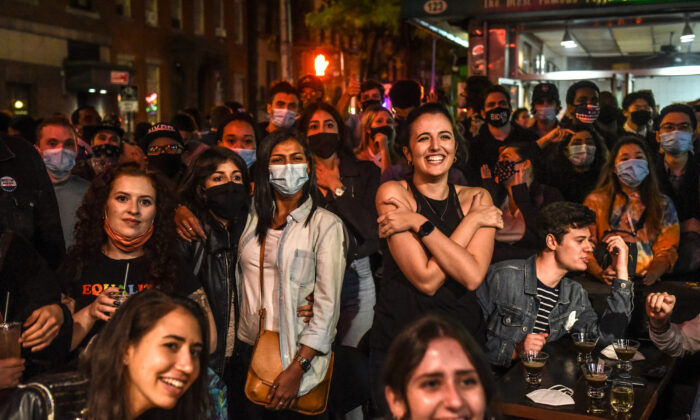 The Biden campaign is imploring people to wear masks and observe social distancing guidelines due to the pandemic amid packed celebrations for Democratic nominee Joe Biden.

Biden campaign senior adviser Symone Sanders, in an interview on CNN on Nov. 8, was asked by Jake Tapper about people seen not wearing masks as they celebrated what many media outlets have called a Biden win.

“New coronavirus cases are soaring,” Tapper said. “We have just had some of the worst days for new infections of the entire pandemic. Is it incumbent upon president-elect Biden to make it clear to his supporters that crowds are a bad idea during this pandemic, even if people are wearing masks, and he understands that they want to celebrate, but they shouldn’t be filling the streets like that?”

Sanders responded by saying that “we have made it clear” that guidelines on precautions to curb the spread of the CCP (Chinese Communist Party) virus should be followed.

“I know folks are excited,” Sanders said. “There are many people who are looking forward to a new day, actually turning the corner and getting this virus under control. But we are imploring folks across the country to be safe, wear your mask, social distance. This virus is very real, and it’s deadly.”

The former vice president’s declaration of victory prompted pushback from Trump, who said in a statement: “We all know why Joe Biden is rushing to falsely pose as the winner, and why his media allies are trying so hard to help him: They don’t want the truth to be exposed.”

After Biden’s win was announced by many media outlets on Saturday, multiple video clips were shared on social media showing thousands of people celebrating in major cities across the country, with some not wearing masks and not observing social distancing guidelines.

Sen. Marco Rubio (R-Fla.), in a tweet, called out media outlets for not reporting on the celebrations from the perspective of an elevated risk to virus spread.

“And suddenly people gathering in large crowds and not social distancing is no longer considered irresponsible by the media,” the Florida Republican wrote.

“Where is @JoeBiden calling on the massive Super Spreader events held in his name to end?” McEnany wrote in a tweet, reacting to a tightly-packed crowd outside the White House singing “YMCA.”