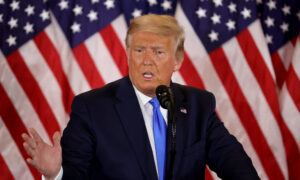 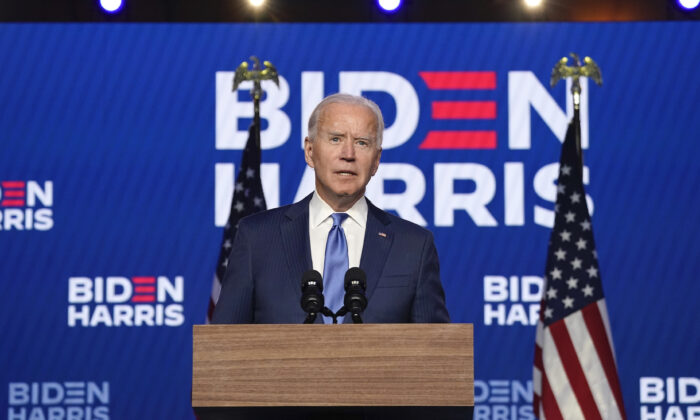 In an email sent on Nov. 10, the campaign said it’s relaunching its “Biden Fight Fund” and is seeking help from supporters to raise $30 million.

“We are confident in our victory, and Joe Biden and Kamala Harris are eager to get to work for the American people, but Trump’s lawsuits will bring this fight to court, and we need to be able to afford the legal battles ahead,” the email states.

“This much litigation is expensive, but we need to be prepared to fight these lawsuits regardless and ensure Trump doesn’t win them just because we don’t have the funds to fight back.”

President Donald Trump and his campaign have started legal challenges in multiple states, asking courts to protect the integrity of the voting and counting process.

Lawsuits have been filed in Pennsylvania, Arizona, Georgia, Nevada, and Michigan. While some lawsuits have since been dismissed, others are making their way through the state and federal judicial systems. Lawyers in one of the cases, which the Trump campaign is asking to join, have filed a request to the Supreme Court for a review.

Trump and his campaign have been vocal about the need to protect the sanctity of the ballot box, arguing that only “legal votes” should be counted. They argue that mail-in ballots postmarked by Nov. 3 but received after Election Day shouldn’t be counted and that votes that were counted without Republican observers present in the ballot-counting centers should also be considered “illegal votes.”

Meanwhile, the Trump campaign also has filed suits seeking to block the certification of results in several states over alleged election irregularities and violations. On Nov. 10, the Trump campaign filed a lawsuit against Michigan Secretary of State Jocelyn Benson and other officials in a federal court, alleging “pervasive” election irregularities and violations in Wayne County, where Detroit is located.

There were “tremendous irregularities with absentee ballots,” including “multiple ballots being run through the machines multiple times,” Trump campaign counsel Thor Hearne said.

That lawsuit also alleges that Republican observers were prevented from having adequate access to the counting process and seeks to determine the accuracy of tabulating equipment or software used in the state due to reports of malfunctioning software.

The president has said that he expects his legal efforts to reach the Supreme Court. The Trump campaign has asked to join a Pennsylvania lawsuit filed by state Republicans challenging a state court ruling that requires election officials to accept mail-in and absentee ballots up to three days after the Nov. 3 election.

The Republican Party of Pennsylvania argues that the extension of the deadline violates federal law that sets Election Day as the first Tuesday after the first Monday in November, and that only the state legislature can decide to extend the deadline, not the courts.

In October, some members of the U.S. Supreme Court indicated that the court was interested in granting a request to review that decision.