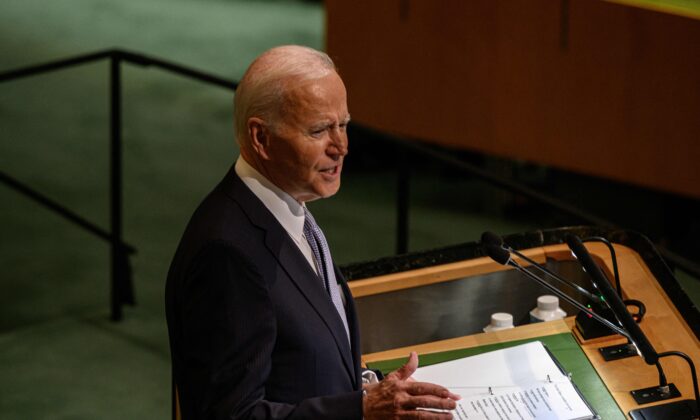 Biden Calls for More UN Support for Ukraine, Says US ‘Not Seeking a New Cold War’

President Joe Biden criticized Russia on Sept. 21 over its invasion of Ukraine as well as a recent Kremlin announcement to mobilize hundreds of thousands of military reserve troops to active service.

Biden also mentioned Russian President Vladimir Putin’s recent comments to deploy more troops, as well as his veiled warning about nuclear weapons by saying that the United States is “not seeking a new Cold War” with Russia.

Putin ordered a partial mobilization of reservists on Sept. 21, nearly seven months after invading Ukraine, in a move that sent some Russians scrambling to buy plane tickets out of the country and reportedly sparked some demonstrations.

In a seven-minute nationally televised address, Putin warned the West that he isn’t bluffing over using everything at his disposal to protect Russia—an apparent reference to his nuclear arsenal. He has previously told the West not to back Russia against the wall and has rebuked NATO countries for supplying weapons to Ukraine.

The total number of reservists to be called up could be as high as 300,000, officials said.

In his address, the Russian leader accused the West of engaging in “nuclear blackmail” and noted “statements of some high-ranking representatives of the leading NATO states about the possibility of using nuclear weapons of mass destruction against Russia.”

“To those who allow themselves such statements regarding Russia, I want to remind you that our country also has various means of destruction … and when the territorial integrity of our country is threatened, to protect Russia and our people, we will certainly use all the means at our disposal,” Putin said. “It’s not a bluff.”

Other than Biden, several Western leaders claimed that Putin’s speech represented an escalation in the conflict.

NATO Secretary General Jens Stoltenberg told Reuters Editor-in-Chief Alessandra Galloni in New York that Russian officials know “very well that a nuclear war should never be fought and cannot be won and it will have unprecedented consequences for Russia.”

Since the war began on Feb. 24, the United States has provided Ukraine’s government with more than $50 billion in aid, including billions of dollars in military assistance.

Earlier this month, the White House submitted a request to Congress for $12 billion more in aid to Ukraine, as well as $2 billion more to shore up U.S. energy supplies to offset war-related impacts on the global energy market. The State Department last week announced last week that another $600 million in military aid will be sent to the country, according to a statement.