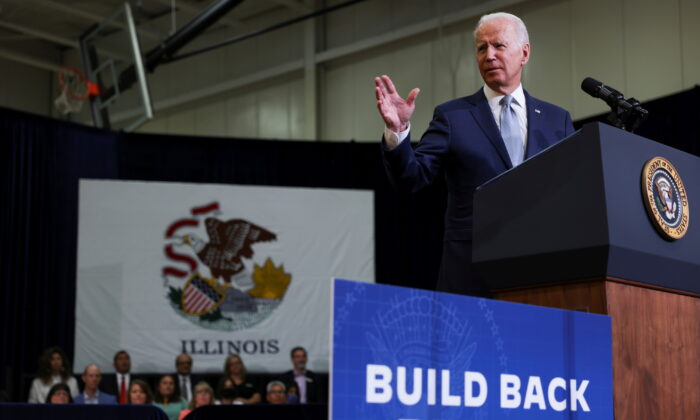 President Joe Biden on July 7 reiterated his call to end tax breaks for fossil fuel companies, a policy proposal that would remove incentives for U.S. oil firms to boost production at a time when gas prices in the United States have soared to seven-year highs and are projected to continue their skyward climb.

Speaking at McHenry County College in Crystal Lake, Illinois, near Chicago, Biden said: “If we end tax breaks for fossil fuels and make polluters pay to clean up the messes they have made, that would raise $90 billion.”

“I’m not asking them to do anything that is unfair. Just not going to subsidize them anymore.”

Biden appeared to be referencing provisions in his $6 billion budget proposal for fiscal year 2022 (pdf), which seeks to repeal 13 different credits, deductions, and other special measures that are targeted to encourage oil, gas, and coal production.

“These oil, gas, and coal tax preferences distort markets by encouraging more investment in the fossil fuel sector than would occur under a more neutral tax system,” the proposal states. “This market distortion is detrimental to long-term energy security and is also inconsistent with the Administration’s policy of supporting a clean energy economy, reducing our reliance on oil, and reducing greenhouse gas emissions.”

A Treasury Department report (pdf) on Biden’s Made in America Tax Plan estimated that eliminating the subsidies for fossil fuel companies would boost government tax receipts by more than $35 billion in the coming decade, while citing research suggesting this would have “little impact on gasoline or energy prices for U.S. consumers and little impact on our energy security.”

Biden’s remarks come as many economists have been raising the alarm about inflationary pressures and as gas prices have surged across the nation to levels not seen since 2014. As of July 5, the national average for a gallon of regular gasoline has risen to $3.22, a seven-year high, according to the U.S. Energy Information Administration.

Patrick De Haan, head of petroleum analysis for GasBuddy, told Fox News in a recent interview that he believes U.S. drivers are unlikely to see relief from high gas prices anytime soon, predicting that the typical seasonal decline in prices won’t kick in until October, and when it does, it will be modest.

Asked whether Biden’s climate change policies were driving gas prices higher, De Haan said it’s unclear whether that’s a factor in the short-term, but in a longer time horizon, he predicted that “absolutely, the Biden administration’s push to go green will probably have more of an impact.”

Since taking office, Biden has canceled permits for the Keystone XL pipeline and paused leases for new oil and gas drilling on federal lands, while vowing to end fossil fuel subsidies and to lower U.S. greenhouse gas emissions by 50 percent by 2030.

Republicans have blamed Biden and his policies for the rise in gas prices.

“As millions of Americans travel this holiday weekend, they are feeling the cost of Biden’s policies at the pump,” Republican National Committee Chair Ronna McDaniel wrote in a July 3 Twitter post. “Gas prices are at their highest level in 7 years.”

Barrasso said the Biden administration’s “hostility to U.S. energy companies and workers that provide four-fifths of our energy is unprecedented.”