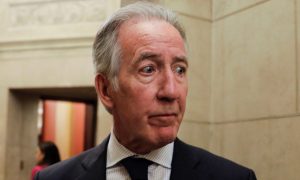 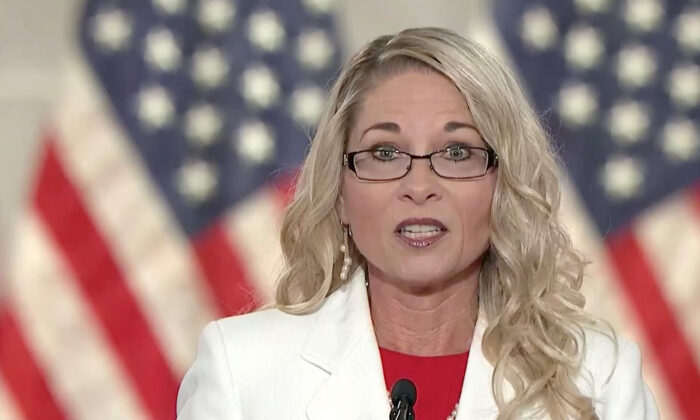 WASHINGTON—Public school teacher Rebecca Friedrichs gave a disparaging account of teachers’ unions during her speech at the Republican National Convention on Aug. 24.

“Our voices have been silenced for decades by unions who claim to represent us. They do not,” she said.

During her 28-year career in California, Friedrichs said she was forced to pay dues to the California Teachers’ Association and the National Education Association, despite opposing their agendas.

She accuses unions of using dues “from unsuspecting teachers” to push a radical agenda in classrooms, and actively working to defeat charter schools and school choice.

“The only way to keep a free republic is with a well-educated, moral citizenry that can self-govern. Unions are subverting our republic, so they undermine educational excellence, morality, law and order,” Friedrichs said.

President Donald Trump has advocated for both charter schools and school choice, as well as suggesting public school funding should follow the child, rather than be poured directly into schools.

The Supreme Court decided in 2018 that public sector employees couldn’t be forced to pay union dues, as it would violate their First Amendment rights of free speech and assembly.

Alternatively, Democratic presidential nominee Joe Biden is a fierce advocate for unions and promises to help strengthen and assist unions to proliferate in all industries, including the clean energy, agriculture, and manufacturing sectors.

“We will increase funding and staffing at the Department of Labor to aggressively enforce wage, hour, health, and safety rules across the economy,” the 2020 Democratic Party platform states.

“We know that strong American labor unions help increase wages and job standards for workers across the economy, which is why Democrats will prioritize passing the PRO Act and restoring workers’ rights, including the right to launch secondary boycotts.”

The PRO Act, or Protecting the Right to Organize Act, was introduced by Rep. Bobby Scott (D-Va.) in 2019 and was approved by the House in February.

The legislation would prohibit employers from replacing strikers, or take action against them; would classify more independent contractors as employees; would force employers to give labor unions the personal contact details of their employees, without the employees’ consent; and would essentially override right to work laws in the 27 states that have them.

The PRO Act is in line with the 2020 Democratic platform, which states: “We will repeal so-called ‘right to work’ laws that undermine worker power and lead to lower wages and less protection for workers across the economy, and ensure those who have been left without wage and hour protections for decades—including domestic workers and farmworkers—have the same rights as other workers.”

The Economic Policy Institute (EPI) published a report on Aug. 25 that advocates for unions and workers’ collective action. The report’s authors support the passage of the PRO Act, as well as other pro-labor legislation.

“The right to a union is a racial justice issue, as well as an economic justice issue,” said Celine McNicholas, a report author and EPI’s director of government affairs.

The authors found that unionized workers earn on average 11.2 percent more in wages than nonunionized peers (workers in the same industry and occupation with similar education and experience). They also say that unions help to decrease racial disparities in pay.

“A labor cartel restricts the number of workers in a company or industry to drive up the remaining workers’ wages,” James Sherk, a labor economics research fellow, wrote for The Heritage Foundation.

“They also retard economic growth and delay recovery from recession. Over time, unions destroy jobs in the companies they organize and have the same effect on business investment as does a 33 percentage point corporate income tax increase.”