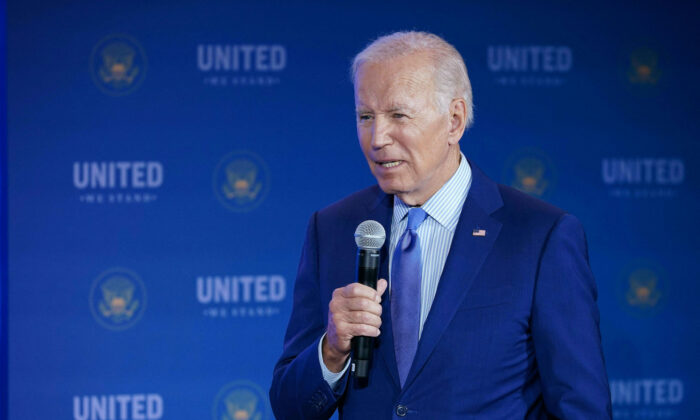 President Joe Biden delivers a keynote speech at the United We Stand Summit at the White House in Washington, Sept. 15, 2022. (Mandel Ngan/AFP via Getty Images)
US News

At a summit at the White House on Thursday to address “hate-fueled violence,” President Joe Biden denounced white supremacists and urged lawmakers in Congress to end special immunity for social media companies.

Biden also called on Americans at large to speak out against racism and extremism at the event, dubbed the “United We Stand” summit, which was attended by bipartisan local leaders, experts, and survivors of hate-based violent attacks.

The event sought “to counter the destructive effects of hate-fueled violence on our democracy and public safety, mobilize diverse sectors of society and communities across the country to these dangers, and put forward a shared, inclusive, bipartisan vision for a more united America,” the Biden administration said on the summit event’s website.

“All forms of hate fueled by violence have no place in America,” the president said at Thursday’s summit, recalling various attacks, including a mass shooting at Pulse nightclub in Orlando, Florida in 2016, and another at a supermarket in Buffalo, New York earlier this year.

“White supremacists will not have the last word,” Biden said, without mentioning any other groups that have incited violence and hate in the United States in recent years.

Biden briefly mentioned the events of Jan. 6, 2021, when the U.S. Capitol was breached, saying that the event didn’t reflect “who we are” as a nation.

He contended that the United States has long had a “through line of hate” against minority groups and that politics and the media have given it “too much oxygen” in recent years.

The Democrat said he wants Congress to “hold social media companies accountable for spreading hate.” The remarks received a standing ovation from attendees.

“I’m calling on Congress to get rid of special immunity for social media companies and impose much stronger transparency requirements on all of them,” Biden said, alluding to Section 230.

Publishers can be held liable for any content they post, while social media platforms are protected by Section 230 of the Communications Decency Act, a federal law that shields online companies from liability related to content posted by users. In particular, part of the law states that “no provider or user of an interactive computer service shall be treated as the publisher or speaker of any information provided by another information content provider.”

The Biden administration has repeatedly called for revoking Section 230 and has also supported ramping up anti-trust and transparency enforcement on technology companies, some of which currently allow users to post anonymously.

The FBI said in 2021 that hate crimes in the United States hit a 12-year high in 2020, the latest available data. The Department of Justice has said it would increase efforts to counter it.

The Biden administration on Thursday announced what appears to be a plethora of initiatives from the public and private sectors to address hate-motivated violence.

This included a $1 billion investment to be pushed by a group of philanthropists called “New Pluralists” to have funders support a 10-year effort to “build a culture of respect, belonging and collaboration in communities and organizations across America” and “stand behind the essential work of courageous uniters, healers, and bridgers.”

Attorney General Merrick Garland announced at the summit that all 94 U.S. Attorneys’ Offices would work on a “United Against Hate” initiative over 2023.

Meanwhile, the Department of Treasury’s Office of Terrorism and Financial Intelligence is developing a website of “key reports and resources on financing domestic violent extremism to help inform the public and private sectors.”

The Biden administration said that “but advancements in digital technologies, including social media and other online platforms, have also led to unintended consequences.” The unintended consequences included “the spread of violent extremist ideologies and mobilization to violence—for which the technology sector must bear responsibility.”

“Americans know how the internet can fuel hate, misogyny, and abuse with spillover effects that threaten the safety of our communities offline,” it added.

YouTube said that among other actions, it will remove “content glorifying violent acts for the purpose of inspiring others to commit harm, fundraise, or recruit, even if the creators of such content are not related to a designated terrorist group.”

Meta, formerly Facebook, will engage in a new research partnership with the Middlebury Institute of International Studies’ Center on Terrorism, Extremism, and Counterterrorism (CTEC). The research will “analyze trends in violent extremism and tools that help communities combat it.”

Twitch, a live-streaming platform owned by Amazon, is set to release a new tool to “accelerate its ongoing commitment to deterring hate.” The tool “empowers its streamers and their communities to help counter hate and harassment and further individualize the safety experience of their channels.” There were no specifics announced about the new tool.

Microsoft has developed some AI/ML tools “that can help detect credible threats of violence or to public safety,” and will make these tools more basic and affordable so that schools and smaller organizations can use them “to assist in violence prevention.”

Microsoft is also developing a “new experience” for Minecraft: Education Edition—a game-based platform for creative learning— to “help students, families and educators learn ways to build a better and safer online and offline world through respect, empathy, trust and safety.”