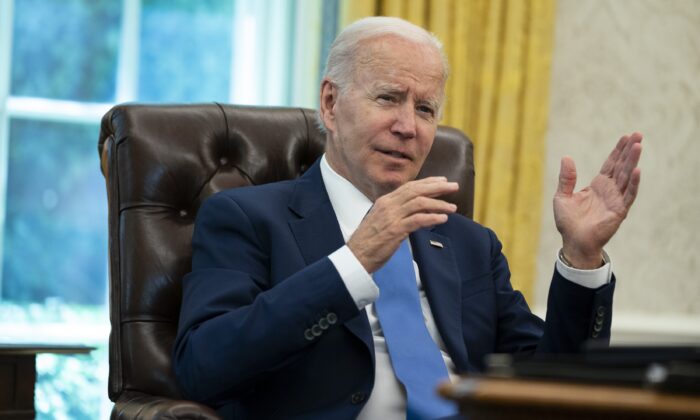 President Joe Biden speaks during an interview with the Associated Press in the Oval Office of the White House in Washington on June 16, 2022. (Evan Vucci/AP Photo)
US News

The Biden administration said on July 21 that it’s asking Congress for $37 billion in funding to deal with surging crime while calling for a ban on “assault weapons” and “high-capacity magazines.”

“We need to fund police who walk the beat, know the neighborhood, are accountable to those they are sworn to serve, and build community trust and safety,” the White House said in a statement, coming two years after top Democrats embraced the polarizing “defund the police” rhetoric amid nationwide Black Lives Matter protests and riots.

The statement noted that the United States needs to “invest in mental health and substance use treatment services, crisis responders, and social workers to reduce the burden on police officers and prevent violent crime” while also expanding community interventions.

Turning to firearms themselves, the administration called to “ban assault weapons and high-capacity magazines,” which weren’t clearly defined in the White House statement. Pro-gun groups have said that the terms “assault weapon” and “high-capacity magazine” are nebulous and don’t have a clear definition and that they prefer terms such as “modern sporting rifle” instead.

White House officials told reporters on July 21 that Biden would speak about the proposal during an event in Wilkes-Barre, Pennsylvania. However, press secretary Karine Jean-Pierre announced in a statement that Biden tested positive for COVID-19 and that he would be isolating while working from home.

According to the White House, the funding proposal would be used in hiring and training 100,000 officers for “accountable community policing,” solving homicides, and setting up community task forces. The funds would also be used to target non-firearms-related crimes, such as drug trafficking.

The FBI in September 2021 stated that the U.S. murder rate surged by nearly 30 percent in 2020—despite COVID-19 lockdowns and stay-at-home orders being issued in numerous municipalities. Some law enforcement groups have said the increase in violent crime is connected to the wave of anti-police sentiment that drove much of the Black Lives Matter protests and riots that year.

And while Biden and top Democrats have called for a new “assault weapons ban,” similar to the one that lasted from 1994 to 2004, a federal agency found that the ban had no effect on reducing violence across the United States.

“We cannot clearly credit the ban with any of the nation’s recent drop in gun violence. And, indeed, there has been no discernible reduction in the lethality and injuriousness of gun violence,” a 2004 National Institute of Justice report reads. “It is thus premature to make definitive assessments of the ban’s impact on gun violence. Should it be renewed, the ban’s effects on gun violence are likely to be small at best and perhaps too small for reliable measurement.”

On July 20, the House Judiciary Committee approved the ban legislation. Several Democratic lawmakers have said that they won’t support the measure, while it’s unlikely that it will reach 60 votes in the Senate.

“As we have learned all too well in recent years, assault weapons—especially when combined with high-capacity magazines—are the weapon of choice for mass shootings,” committee Chairman Jerry Nadler (D-N.Y.) said this week. “These military-style weapons are designed to kill the most people in the shortest amount of time. Quite simply, there is no place for them on our streets.”