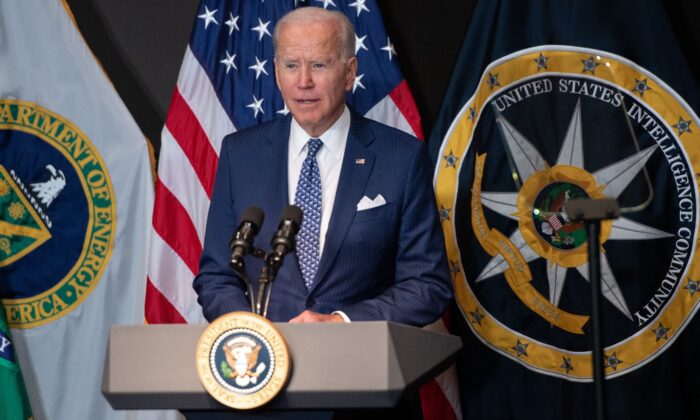 U.S. President Joe Biden addresses the Intelligence Community workforce and its leadership while on a tour at the Office of the Director of National Intelligence in McLean, Va., on July 27, 2021. (Saul Loeb/AFP via Getty Images)
By Jack Phillips

The Biden administration on July 29 stated that federal workers and contractors will have to show proof of vaccination against COVID-19 or else wear masks, engage in social distancing, and submit to regular COVID-19 testing.

“Right now, too many people are dying or watching someone they love die and say if ‘I’d just got the vaccine,’” President Joe Biden said in the East Room of the White House. “This is an American tragedy. People are dying who don’t have to die.”

In a statement released by the White House, the administration said the new rules were laid out because of the Delta COVID-19 variant.

“Anyone who does not attest to being fully vaccinated will be required to wear a mask on the job no matter their geographic location, physically distance from all other employees and visitors, comply with a weekly or twice weekly screening testing requirement, and be subject to restrictions on official travel,” the White House stated in a fact sheet.

Those rules, according to the White House, apply also to onsite contractors who work with the federal government. The Biden administration will also recommend the same model to employers across the United States.

Along with the new federal government requirements, the White House stated that Biden would direct the Defense Department to investigate “how and when” it will require military members to take the vaccine.

“As a large employer, the largest in this country, who cares about individuals who keep the government running, we have an obligation to be good stewards of the work force and ensure their health and their safety,” White House spokeswoman Karine Jean-Pierre told reporters on July 29.

The United States has around 2.18 million civilian employees and 570,000 other employees who work for the U.S. Postal Service, according to federal data. It isn’t clear if the Biden administration will apply the mandate to Postal Service workers.

The American Postal Workers Union (AWPU) stated this week that it opposes the administration’s vaccine mandate, arguing that it isn’t the role of the federal government to mandate vaccines or other testing measures.

“Issues related to vaccinations and testing for COVID-19 in the workplace must be negotiated with the APWU. At this time the APWU opposes the mandating of COVID-19 vaccinations in relation to U.S. postal workers.”

Brian Rothenberg, a spokesman for the 397,000-member United Auto Workers, told The Associated Press that while the union encourages workers to get vaccinated, it’s against mandates because some people have religious or health concerns. Larry Cosme, the head of the Federal Law Enforcement Officers Association, which represents 30,000 federal officers and agents, stated that the shots shouldn’t be compelled although the union supports vaccines.

The administration’s announcement, meanwhile, comes after the U.S. Centers for Disease Control and Prevention (CDC) issued guidance this week recommending vaccinated and unvaccinated individuals wear masks in high-transmission areas. Throughout the pandemic, the CDC has stated that people should wear masks, but in May stated that unvaccinated individuals don’t need them before it reversed course several days ago.

Some of the nation’s biggest companies have moved to require vaccinations for their employees. Big tech firms such as Facebook and Google announced that employees would have to show proof they’ve been fully vaccinated before returning to work.

About 60 percent of American adults have been fully vaccinated to date. Biden had set a July 4 goal to get at least one COVID-19 shot in 70 percent of adults. The latest figure is about 69 percent.