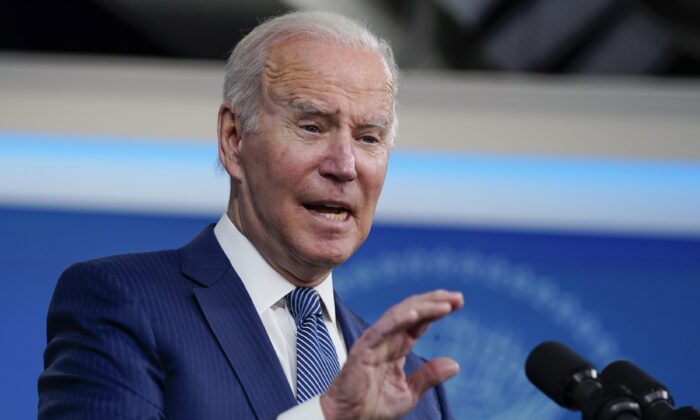 President Joe Biden announced on Dec. 2 a number of measures that he hopes will help combat COVID-19 as his administration struggles to control the disease, but vowed to try not to force areas to lock down, after two cases of the Omicron virus variant were detected in the United States.

Biden and his administration are extending the mask mandate on airplanes, trains, and public transportation into March 2022, helping to launch hundreds of new vaccine clinics and forcing all inbound international travelers to test negative for COVID-19 within one day of departure, regardless of vaccination status or nationality.

The president and his advisers are also ramping up marketing to try to convince all eligible Americans to get a COVID-19 vaccine booster shot, as more and more studies show that COVID-19 vaccine effectiveness wanes over time.

It’s all part of what Biden described as a “battle plan to combat COVID-19 this winter.” The plan “pulls no punches in the fight against COVID-19,” he said, with the hope being that the effort “unites us.”

The plan “doesn’t include shutdowns or lockdowns,” Biden said, nor additional mandates. The three primary mandates he and his administration have put forth are currently blocked by the courts because judges said they’re likely illegal.

He was speaking at the National Institutes of Health in Bethesda, Maryland, following a meeting with top medical advisers, including Drs. Anthony Fauci and Francis Collins.

Cases of COVID-19 caused by the Omicron variant of the CCP (Chinese Communist Party) virus were identified in two different states this week, and scientists and officials believe that the strain will appear elsewhere.

“We do anticipate there will be more cases,” White House press secretary Jen Psaki told reporters at the White House.

Omicron was first identified by scientists in South Africa in November, though it dates back to at least October, according to genomic sequencing done by Nigerian experts.

South African scientists said in a pre-print paper published on Dec. 2 that an analysis of surveillance data indicated that the variant better evades immunity from prior infection, widely known as natural immunity, when compared to earlier variants.

It’s not yet known whether the variant can also better evade the protection by vaccines, according to the scientists.

Health officials in the United States are urging people who haven’t gotten a vaccine to get one, and those who have gotten one to get a booster. They’re also cautioning people against overreacting, emphasizing that little is known about Omicron.

Biden said the United States is entering the winter in “a position of strength,” since nearly three out of four adults are fully vaccinated, compared to just 1 percent at this time in 2020.

Many children can also now get a COVID-19 vaccine, he said. Regulators have cleared Pfizer’s vaccine for kids as young as 5, and one prong of the new plan is to ensure that the Food and Drug Administration has all the resources it needs to authorize the shot if clinical trial data suggest it’s safe and efficacious for younger children.

“President Biden is unveiling a plan today to keep Americans safe and healthy without last year’s awful winter that saw widespread school and business closures and 3,000-4,000 deaths per day at its peak,” Rep. Don Beyer (D-Va.) wrote on Twitter.

However, Republicans contrasted the stricter rules for international arrivals with the administration’s treatment of the southern border, where more illegal immigrants have crossed in 2021 than in any other year in recorded history.

“While Biden implements strict travel mandates on his own citizens, he allows hundreds of thousands of illegal immigrants to flow into the country at unprecedented rates,” Rep. Beth Van Duyne (R-Texas) said. “This has never been about COVID—it is all about control.”