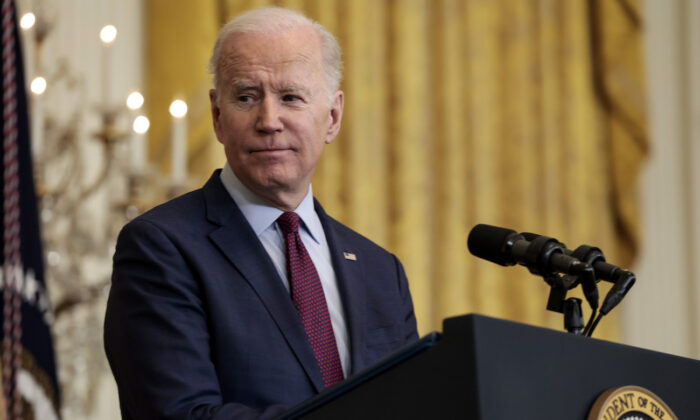 President Joe Biden announced Friday changes to the requirements for products purchased by the federal government to be considered “made in America.”

The change to the 1978 Buy American Act will gradually increase the percentage of a product’s components required to be manufactured domestically in order to receive a “made in America” designation. Under the current rule, 55 percent of a product is needed to meet the requirement; the change will increase that number to 75 percent by 2029.

The federal government spends more than $600 billion each year buying goods and services, according to a release from the White House.

The Small Business Administration has also created a new manufacturing office and works with the Hollings Manufacturing Extension Partnership to source American products for purchase by taxpayer dollars, according to the release.

Biden also announced the creation of a new price preference, allowing the government to pay more for American-made products that are critical to national security or national health. These could include semiconductors, some pharmaceutical ingredients, and advanced batteries, he added.

“It’s worth it for us to ensure that we have a domestic capacity to protect us from shortages and price spikes in the future,” Biden said.

In Friday’s address, Biden made the case that his policies, paired with investments from the private sector to increase domestic manufacturing, will ensure that that country’s economic future and “effort to combat the climate crisis” will be made in America.

“What we’ve seen in the past few months is more reason why we need to reject the defeatist view that the forces of automation and globalization mean we can’t have good-paying union jobs manufacturing here in America,” said Biden.

The announcement came alongside a pledge from the American branch of the German-based tech company Siemens to invest $54 million and create 300 jobs for the domestic production of electrical components in electric vehicle charging stations, data centers, and industrial sites. Some of the jobs will be in California and Texas.

Biden has also credited his policies as spurring other recent manufacturing investments from the private sector. These include Intel’s planned $20 billion semiconductor manufacturing facility outside Columbus, Ohio, and an announcement from General Motors that it will invest $7 billion in electric vehicle manufacturing at sites across Michigan.

Biden’s announcement came hours after the release of the Department of Labor’s February jobs report. American job growth exceeded expectations last month as employers added 678,000 jobs while unemployment ticked down to 3.8 percent, according to the report.