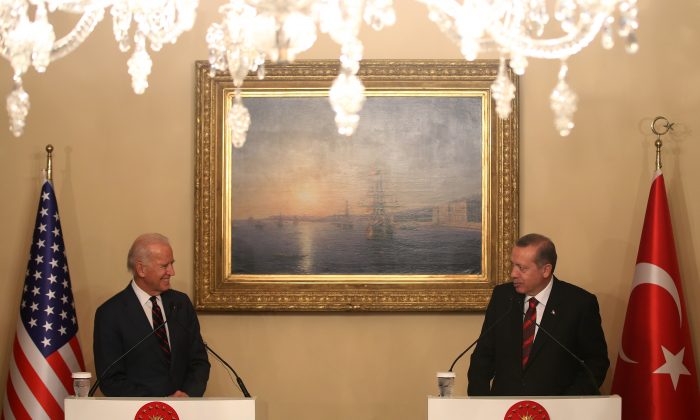 US Vice President Joe Biden (L) and Turkish President Recep Tayyip Erdogan speak to the media during a joint news conference in Istanbul, Turkey, Saturday, Nov. 22, 2014. Biden on Friday became the latest in a parade of US officials trying to push Turkey to step up its role in the international coalition's fight against Islamic State extremists. (AP Photo/Emrah Gurel)
Middle East

ISTANBUL—Vice President Joe Biden and Turkish President Recep Tayyip Erdogan emerged from a nearly four-hour meeting Saturday, offering no indication that the U.S. and Turkey had bridged their differences about how to deal with Islamic State fighters or Syrian President Bashar Assad.

Biden announced $135 million in new U.S. aid for Syrian civilians, including some for Turkey, which is hosting 1.6 million refugees, but the two leaders didn’t offer details about how they were working together to ramp up Ankara’s role in the international coalition’s fight against IS fighters in neighboring Syria and Iraq.

The setting to achieve common ground on their separate strategies for Syria could not have been better: Erdogan’s elegant residence in Istanbul, overlooking the Bosphorus Bridge that connects Europe and Asia. But if they made any deals, they did it privately.

In statements to reporters after their meeting, each lauded the six-decade relationship between the two NATO allies.

But there was no mention of Turkey’s Incirlik Air Base, which the U.S. wants to use to launch strikes against IS militants in Syria and Iraq. Biden only briefly mentioned Turkey’s plans to train and equip moderate Syrian opposition fighters, but no details were disclosed. Neither mentioned Turkey’s call for a no-fly zone, or safe zone, in northern Syria, where Western-backed opposition fighters would be safe from Assad’s air force.

Biden said the two spoke at considerable detail about Iraq and Syria, and that he believes the U.S.-Turkey relationship is “as strong as it has ever been.”

“We need Turkey, and I think that Turkey believes that it needs us as well,” he said.

Erdogan said he and Biden talked about Iraq, Syria as well as other global issues, and that they plan to continue to hold such discussions.

“We gladly saw that we have the same opinion with the United States on most of the issues we discussed. We confirmed our decision to improve our cooperation. Most importantly, as being two NATO allies, we confirmed once more our commitment to each other’s defense and security,” said Erdogan.

A senior administration official said the meeting was not void of progress and that both leaders achieved better clarity about the needs of both countries. The official said the U.S. and Turkey agree that IS needs to be defeated, that moderate Syrian forces need to be trained, including at one base in Turkey, and that a political transition is needed in Syria that does not include Assad. The official was not authorized to publicly disclose details of the meeting and spoke on condition of anonymity.

Biden said in a statement that the new aid money will raise the amount of assistance the U.S. has provided to more than $3 billion since Syria’s crisis began.

The new funding will help feed vulnerable people inside Syria; Syrian refugees in Turkey; and Syrian refugees in other neighboring countries. More than 190,000 Syrians from Kobani, a Syrian town near the border, fled to Turkey in recent weeks.

Meanwhile, about 300 people protested Biden’s visit to Turkey, chanting: “Biden get out. This country is ours.” The demonstration occurred on the European side of Istanbul, as Biden was on his way to a meeting with Erdogan on the Asian side of the city.

Biden didn’t see the protest, which was organized by the Youth Association of Turkey, the same group that roughed up three U.S. Navy sailors while chanting “Yankee, go home!” a week ago in Istanbul. The protesters threw red paint at the sailors and briefly succeeded in putting white sacks over their heads. The servicemen, who were not hurt, were from the USS Ross, a guided-missile destroyer then docked on an inlet of the Bosphorus Strait in the Black Sea.