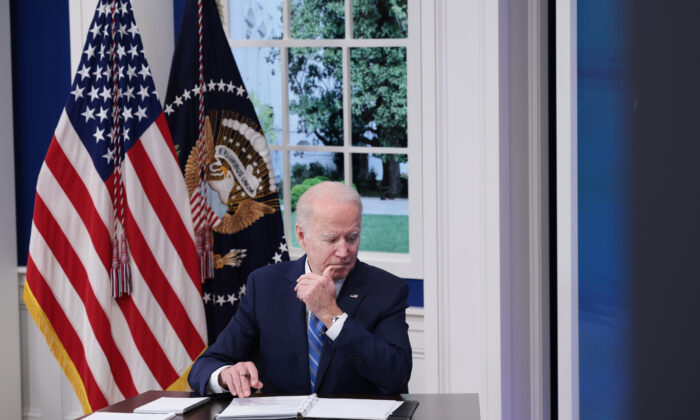 President Joe Biden’s administration announced a new initiative on Monday to address the high prices Americans are paying for meat.

The steady rise in the cost of food nationally over the past year has been driven by sharp increases in meats and poultry.

Over the past 12 months leading up to November, the cost of beef has gone up 20.9 percent while the cost of all food at home has risen 6.4 percent, according to the Department of Labor (DOL).

In November, the cost of pork jumped by 2.2 percent compared to a 0.8 percent increase for all food at home.

The administration says it will steer $1 billion from the American Rescue Plan towards expanding the capacity of independent food processors.

According to the White House, a small number of companies in control of the meatpacking and processing industry are creating a bottleneck in the food supply chain and increasing their profits at the expense of farmers and ranchers.

“Our farmers and ranchers have to pay whatever these four big companies say they have to pay,” Biden said at a meeting on Monday with leaders in the farming and ranching industry.

The big four processors in the U.S. beef sector are Cargill, a global commodity trader based in Minnesota; Tyson Foods Inc, the chicken producer that is the biggest U.S. meat company by sales; Brazil-based JBS SA, the world’s biggest meatpacker; and National Beef Packing Co, which is controlled by Brazilian beef producer Marfrig Global Foods SA.

“If we can process them on the local level and sell actually to consumers, it’s just a win-win for everybody,” said Scott Blubaugh, the president of both the American Farmers & Ranchers and Oklahoma Farmers Union at Monday’s meeting.

Another Point of View

Consumer costs for all products rose to a 31-year record 6.8 percent in November.

“In beef production for example, the same four firm concentration ratio has been operating in the market for nearly 30 years. Why the sudden inflation?” asks Potts in the statement.

“The answer,” she continues, “is consumer demand for meat and poultry products has never been higher. Members of the Meat Institute are producing more meat than ever before under extraordinary circumstances to keep our farm economy moving and to put food on American’s tables.”

Biden’s plan allocates $800 million for grants and loans for independent processing plant projects, another $100 million in loan guarantees and $100 million to reduce the cost of inspections for small processing facilities.

The move comes as part of Biden’s executive order meant to promote competition in the American economy signed in July.