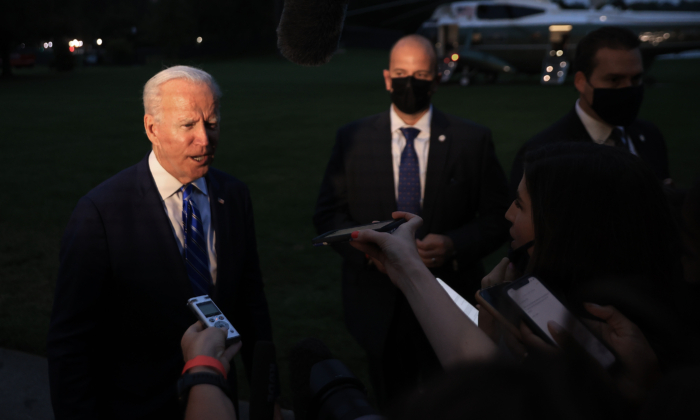 President Joe Biden briefly speaks to reporters about his Build Back Better legislation and Taiwan after returning to the White House in Washington, D.C., on Oct. 5, 2021. (Chip Somodevilla/Getty Images)
US-China Relations

Biden Says He and China’s Xi Talked About Taiwan Issue

President Joe Biden told reporters on Tuesday that during a phone call, he and Chinese leader Xi Jinping committed to abiding by the “Taiwan agreement.”

Biden made the statement following days of provocations from the Chinese regime, which has deployed dozens of warplanes into Taiwan’s air defense zone.

“I’ve spoken with Xi about Taiwan. We agree. We will abide by the Taiwan agreement. That’s where we are and I made it clear that I don’t think he should be doing anything other than abiding by the agreement,” Biden said.

However, the two leaders might have different interpretations of what constitutes the “agreement.” For Biden, he appeared to be referring to Washington’s decades-long “one-China policy,” which asserts that there is only one sovereign state with the name “China.”

In contrast, the Chinese regime stands by its own “one-China principle” under which Beijing asserts sovereignty over Taiwan. The Chinese regime has a known track record of demanding other governments adopt its principle on Taiwan, which the United States has not accepted.

Biden also appeared to be referring to a 90-minute phone call he had with Xi on Sept. 9, the first call between the two in seven months, during which the president told his Chinese counterpart that both nations must ensure that “competition does not veer into conflict.”

In recent days, the Chinese regime has been escalating its military aggression towards the democratic island it claims as its own. Beijing sent 56 warplanes into Taiwan’s air defense zone on Oct. 4, the largest on record. It capped off four days of provocations involving nearly 150 military aircraft.

The incursions on Monday occurred despite condemnation and a demand to stop the activities issued by the United States a day prior.

“The United States is very concerned by the People’s Republic of China’s provocative military activity near Taiwan, which is destabilizing, risks miscalculations, and undermines regional peace and stability,” State Department spokesman Ned Price said in a statement on Oct. 3.

“We urge Beijing to cease its military, diplomatic, and economic pressure and coercion against Taiwan.”

Beijing responded to the mounting criticism on Monday by warning Washington that its arms sales to Taiwan and U.S. warships sailing through the Taiwan Strait would affect bilateral relations.

Taiwanese President Tsai Ing-wen warned in an essay published on Oct. 5 that there would be “catastrophic“ consequences for regional peace and democracy if Taiwan fell to the CCP.

“Taiwan is on the frontlines of the global contest between liberal democracy and authoritarianism,” Tsai wrote, adding that the country is not seeking war and expects “peaceful, stable, predictable, and mutually beneficial coexistence with its neighbors.”

“But if its democracy and way of life are threatened, Taiwan will do whatever it takes to defend itself,” Tsai said.

The Chinese Communist Party claims Taiwan as its own territory and has vowed to take it by force if necessary. TRA requires that Taiwan’s future be determined peacefully.

The Epoch Times has contacted the White House and State Department for further clarification on Biden’s comments.