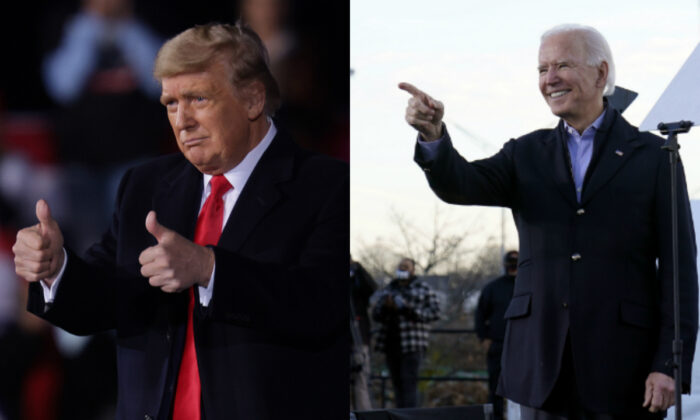 In a speech Dec. 21 on his administration’s strategy for dealing with the new Omicron variant of COVID-19, Biden noted he had received his booster shot for the virus and then went on to praise Trump for getting his as well.

“I got my booster shot as soon as they were available,” Biden said Tuesday. “And just the other day former President Trump announced he had gotten his booster shot. It may be one of the few things he and I agree on.”

Biden went on to reference Trump a second time in the speech when he praised the former administration’s efforts to develop a vaccine using federal support from Trump’s Operation Warp Speed—a public-private partnership meant to expedite the creation, approval, and manufacturing of vaccines to combat the CCP virus.

“Let me be clear. Thanks to the prior administration and our scientific community, America was one of the first countries to get the vaccine,” Biden said. “Thanks to my administration and the hard work of Americans, we led a roll out, made America among the world leaders in getting shots in arms.”

A few hours later, Trump told Fox News that he is “very appreciative” and “surprised” that Biden acknowledged the Trump administration’s work.

“I think he did something very good,” Trump added. “You know, it has to be a process of healing in this country, and that will help a lot.”

During a press briefing the following day White House press secretary Jen Psaki characterized Biden’s comments on Trump saying, “I think it was an acknowledgement that the former president sent an important signal to many Americans about the importance of getting boosted.”

“I think it’s a reflection of the president’s belief that the enemy of the American people is the virus,” Psaki added. “And this shouldn’t be a political battle.”

Both presidents have voiced support for the vaccines but differ on the enforcement of vaccine mandates.

A Biden executive order in November allowed the Occupational Health and Safety Administration to create a rule requiring all businesses with 100 or more employees to put vaccine mandates in place or require weekly testing for the virus.

Trump has voiced opposition to the rule but has encouraged Americans to get vaccinated.