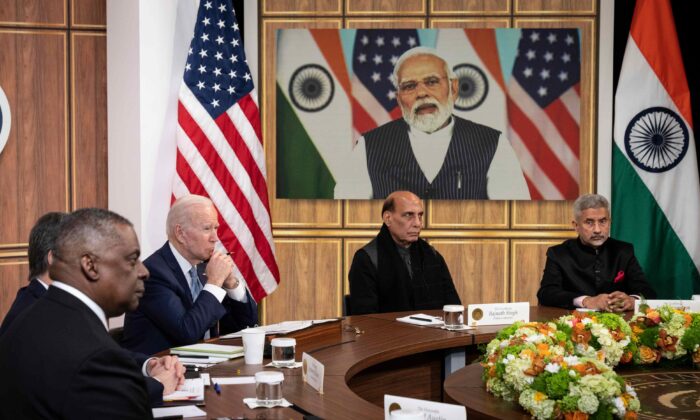 Biden and Modi Meet Virtually, Discuss ‘Solving a Lot of Global Problems’ Together

NEW DELHI—President Joe Biden and Indian Prime Minister Narendra Modi met virtually on April 11 ahead of the 2+2 bilateral meeting between their foreign and defense ministers. The two leaders talked about “deeper and stronger” relationships and about together working to solve many persisting global problems.

“We take the same concerns about the global challenges we face—from COVID-19, advancing health security, and tracking the climate crisis—and we share a strong and growing Major Defense Partnership,” said President Biden during remarks before the meeting.

“At the root of our partnership is a deep connection between our people—ties of family, of friendship, and of shared values.”

Biden said both the countries are going to keep closely consulting each other on the Ukraine situation and on how to manage the impact of the Russian invasion.

“I want to welcome India’s humanitarian support for the people of Ukraine, who are suffering a horrific assault, including a tragic shelling in a train station last week that killed dozens of innocent children and women and civilians attempting to flee the violence,” said Biden.

Modi said the situation in Ukraine is “worrying” and he pointed to India’s successful rescue operation of over 20,000 Indians stuck in Ukraine. He mentioned that extensive discussions on Ukraine happened in the Indian Parliament and hoped that the ongoing discussions between Russia and Ukraine will lead to peace.

“During this entire process, I spoke several times on the phone to the presidents of both Ukraine and Russia. I not only appealed for peace but also suggested that there be direct talks between President Putin and the President of Ukraine,” he said.

India is one of a few countries that has not publicly denounced Russia’s invasion of Ukraine. It has abstained from 10 UN votes on the issue, though it has called for an end to violence and offered humanitarian support to Ukraine.

India has resisted U.S. pressure to condemn Russia and when Biden last spoke with Modi with other leaders of the Quadrilateral Security Dialogue in March, India blocked U.S. attempts to put Russia-Ukraine on agenda. Later Biden described India’s stand on the issue as “somewhat shaky” leading to wider speculation that the issue will dent the India-US relationship.

“The Biden-Modi meeting before the ‘2 plus 2’ summit demonstrated the importance the Biden administration accords to ties with India. The statements issued also demonstrate that both sides managed to put forth their views on all issues, from Russia to the Indo-Pacific,” Aparna Pande, director of Washington-based think tank Hudson Institute’s Initiative on the Future of India and South Asia, told The Epoch Times.

The India-U.S. dialogue should also be viewed in the context of China’s expansionist agendas according to Madhav Nalapat, vice-chair of the Manipal Advanced Research Group.

“The virtual meeting between Biden and Modi demonstrates that the U.S. India security relationship is becoming the most important pairing in this era of PRC [People’s Republic of China] efforts at hegemony,” said Nalapat.

After the meeting between Biden and Modi, U.S. Secretary of State Tony Blinken and the Defense Secretary Lloyd Austin met India’s External Affairs Minister S. Jaishankar and Defense Minister Rajnath Singh in Washington on Monday for the fourth 2+2 ministerial dialogue between the two countries—the first under the Biden administration.

Before the meeting, the Indian Ministry of External Affairs said that the 2+2 dialogue will help the two countries discuss important regional and global developments and work toward common interests.

“The dialogue would enable both sides to undertake a comprehensive review of cross-cutting issues in the India-US bilateral agenda related to foreign policy, defense, and security with the objective of providing strategic guidance and vision for further consolidating the relationship,” said the Indian ministry.

The two countries are celebrating 75 years of diplomatic relations this year and after the 2+2 Ministerial Dialogue, the State Department’s spokesperson said that both the countries share a common commitment to democracy and pluralism.

“Both countries seek to continue to promote a resilient, rules-based international order that safeguards sovereignty and territorial integrity, upholds democratic values, and promotes peace and prosperity for all,” said the spokesperson.

Nalapat said that the meetings show that the “progressive improvement” in the India-U.S. relationship is irrespective of the party in power in the United States.

“Modi has made this relationship the centerpiece of his transformative foreign policy and the momentum has remained in the Obama, Trump, and Biden administrations,” he said.

Modi’s close aide, Defense Minister Singh, said in a message on Twitter that the Indo-U.S. Defense cooperation is further getting expanded and strengthening.

Austin said that the two countries are working closely to make “systems affordable.” Singh later said in an interview in Washington that affordability matters when India needs to export something that it needs but can’t produce.

“On the issue of future systems, we are engaged in active discussions with India on how to best support their modernization needs. As we look at the future, we want to make sure that we maintain the ability to operate together, and so we look forward to those continued discussions, and it also includes a range of options that would make our systems more affordable,” Austin said at an April 11 press conference.

Abhishek Srivastava, assistant professor of diplomacy at New Delhi’s Jawaharlal Nehru University, told The Epoch Times that India is looking for investment in the defense sector because it wants to reduce its dependency on exports and boost its “Make in India” program.