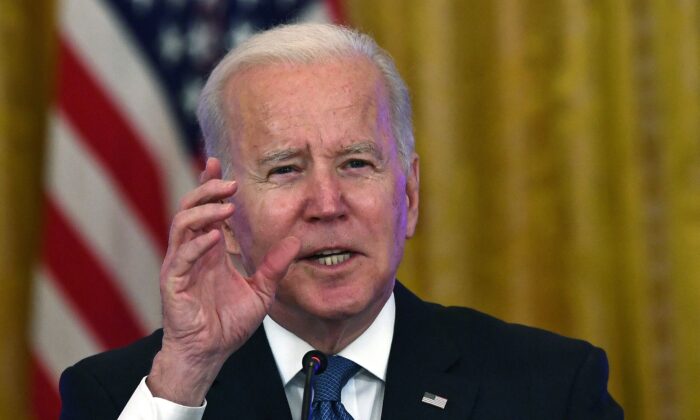 President Joe Biden speaks as he meets with members of his administration at the White House in Washington on Jan. 24, 2022. (Brendan Smialowski/AFP via Getty Images)
Europe

President Joe Biden issued a joint statement Friday with EU President Ursula von der Leyen to take measures to sure up energy supplies to Europe, which depends largely on natural gas from Russia.

The statement released on Jan. 28 announces a joint commitment to “the progressive integration of Ukraine with the EU gas and electricity markets.” It also renews a commitment to the carbon emission reduction goals of the Paris Climate Accord, describes efforts to avoid “supply shocks” that could result from a further Russian invasion of Ukraine, and calls on all major energy-producing countries to help ensure world energy markets are stable and well-supplied.

Tensions between Russia and Ukraine have led to concerns about European dependence on Russian gas. Russia has amassed tens of thousands of troops along its border with Ukraine, as well as in Russia-annexed Crimea and Belarus.

Russia has denied that it is planning an invasion and has pointed to the Western response as evidence that Russia is the target, not the instigator, of aggression.

And at a news conference in Kyiv Friday, Ukrainian President Volodymyr Zelensky called on mass media and Western leaders to tone down rhetoric that suggests an imminent Russian invasion.

“The image that mass media creates is that we have troops on the roads, we have mobilization, people are leaving places. That’s not the case,” said Zelensky. “We don’t need this panic.”

Zelensky went on to acknowledge Russian escalation in recent weeks but noted “we have been talking about this for eight years now.”

Zelensky added that the talk of war is having an adverse effect on Ukraine’s economy.

“I started talking to the leaders of the countries and to explain to them that we need to stabilize the economy,” he explained. “They are saying ‘tomorrow is the war.’ This means panic. Calm the market panic in the financial sector.”

U.S. officials have said repeatedly that Russian troop movements on the Ukrainian border suggest a Russian invasion of Ukraine could happen “at any time.”

The United States is the largest supplier of liquefied natural gas (LNG) to the EU, but Europe relies on Russia for around a third of its natural gas.

Friday’s statement says the United States and EU will work to find supply of additional volumes of natural gas to Europe from diverse sources across the globe. The governments say they will do this while continuing to “enable the transition to net zero emissions.”

The United States has been in talks with major energy-producing countries and companies around the world to discuss a potential diversion of supplies to Europe if Russia invades Ukraine, a senior Biden administration official told reporters earlier this week.

Biden has said, and Defense Department officials have confirmed, that the United States has no intention of sending troops to Ukraine. The United States, earlier in the week, did place 8,500 troops at a “readiness to deploy” if needed to support Eastern NATO countries.

The United States has threatened that it will, in coordination with its allies in Europe, place sanctions on Russia if it further invades Ukraine.

Sanctions on Russia could impact gas flows through pipelines like Yamal-Europe, Nord Stream 1, and TurkStream.