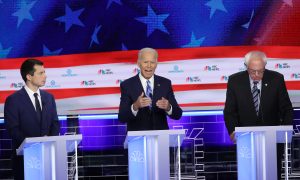 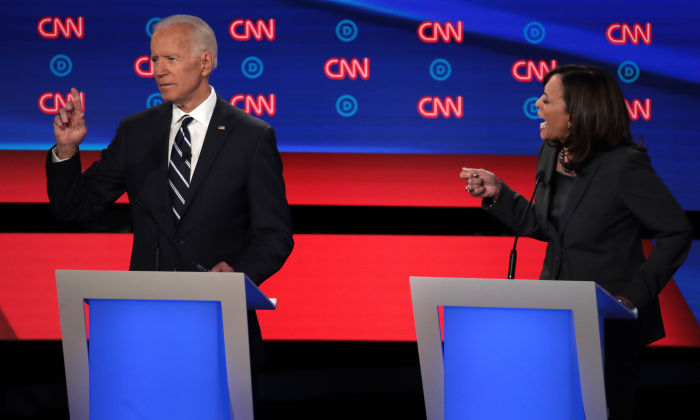 Biden, Bennet Expose Socialist ‘Medicare for All’ in Democratic Debate

Former Vice President Joe Biden and Sen. Michael Bennet (D-Colo.) on July 31 repeatedly exposed the staggering cost and immediate consequences of the socialist Medicare for All policy during the second night of the second 2020 Democratic presidential primary debate.

Bennet and Biden forced Sen. Kamala Harris (D-Calif.) to defend her own health care plan, which calls for transitioning to the socialist Medicare for All model in 10 years. Biden pointed out that Medicare for All is estimated to cost more than 30 times the amount of the plan he is proposing. Bennet cautioned voters that Medicare for All would make employer-based health insurance plans illegal.

Socialist Sen. Bernie Sanders (I-Vt.), the author of the Medicare for All bill, defended the policy during the first night of the debate in Detroit, on July 30. Health care is one of the key issues in the Democratic presidential primary. Biden, who leads the field in the polls, opposes Medicare for All, while the three candidates trailing him closely in the polls support it.

Medicare for All would eliminate the private health insurance industry and grant government unprecedented control of the health sector. Sanders plans to tax middle-class Americans to pay for Medicare for All and calls for a four-year transition. Harris, who released her health care plan days before the debate, plans to pay for the plan by taxing stock trades and calls for a 10-year transition.

Biden and Bennet challenged Harris by suggesting that it is bad policy to take away private and employer-based health insurance plans from Americans in favor of a government-run system. Harris sidestepped the challenge by talking about the portion of her plan that would be in effect during the transition period, instead of addressing what would happen when Medicare for All is fully implemented after 10 years.

“To be very blunt and to be very straight forward, you can’t beat President Trump with double-talk on this plan,” Biden said.

Bennet repeatedly pressed Harris, pointing out that the policy’s estimated $32 trillion price tag over the course of 10 years is roughly 70 percent of the total current projected government spending. Harris again evaded the criticism at hand and made an emotional plea, telling Bennet to not employ the same talking points as Republicans and calling any health care plan that doesn’t cover every American “immoral.”

The health care argument laid bare a challenge facing candidates in the primary. While supporting the socialist Medicare for All proposal is popular with the far-left base necessary to win the primary, the policy is extremely unpopular with the U.S. voters whose support the eventual Democratic nominee will need to win in the 2020 election.

As a result, Harris and Sanders have had to result to what Biden called “double-talk” when describing Medicare for All.

“Medicare for All would throw millions of Americans off of private plans they are very happy with, would add billions to our national debt, and in the long run fail to provide adequate medical care for everyone,” said Steven Rogers, a member of President Donald Trump’s campaign advisory board. “Medicare for All is a socialist program doomed to fail.”

Biden continues to lead the Democrats, with a 32.2 percent in an average of polls by Real Clear Politics. Sanders, Sen. Elizabeth Warren (D-Mass.), and Harris trail him with 16.2 percent, 14.3 percent, and 10.8 percent, respectively.

The other candidates on stage on July 31 were split on their plans for health care. Entrepreneur Andrew Yang and New York City Mayor Bill de Blasio appeared to support a universal health care system like Medicare for All; Rep. Tulsi Gabbard of Hawaii and Sen. Kirsten Gillibrand of New York didn’t provide specifics. Former Housing and Urban Development Secretary Julian Castro said he would keep private health care plans, but called for further regulating the industry.

The next round of debates is scheduled for Sept. 12 and 13.