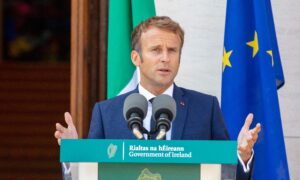 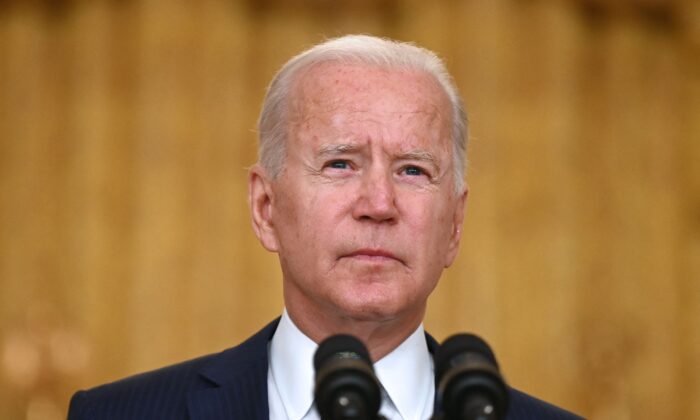 President Joe Biden delivers remarks on the terror attack at Hamid Karzai International Airport, and the U.S. service members and Afghan victims killed and wounded, in the East Room of the White House, Washington, on Aug. 26, 2021. (Jim Watson/AFP via Getty Images)
Executive Branch

Biden: America Will Retaliate Against ISIS for Kabul Bombings

The United States will strike ISIS in retaliation for bombings in Kabul that left a dozen U.S. troops dead, President Joe Biden said on Thursday.

“To those who carried out this attack, as well as anyone who wishes America harm, know this: we will not forgive. We will not forget. We will hunt you down and make you pay. I’ll defend our interests and our people with every measure at my command,” Biden said from the White House in Washington.

ISIS claimed responsibility for the attack, bragging that a suicide bomber made it through both Taliban checkpoints and the U.S. security presence in Afghanistan’s largest city.

The ISIS terrorist “managed to reach a large gathering of translators and collaborators with the American army, and then he detonated his explosive belt,” the group said in a statement. It claimed the attacker was able to get within five meters of U.S. troops at an eastern gate to the airport.

U.S. officials initially pegged the death toll among Americans at 12, with another 15 troops wounded. Another service member died hours later, according to The Associated Press.

Kabul health officials were quoted as saying that at least 60 Afghan civilians were killed, reported Reuters.

He related how his late son, Beau Biden, died of cancer after serving in the military, recounting feeling “like you’re being sucked into a black hole in the middle of your chest.”

U.S. troops have been cooperating with the Taliban terrorist group, which took over Afghanistan in mid-July, to carry out mass evacuations in the country. There is no indication the Taliban was involved in the attack or let it happen, Biden said, echoing Gen. Kenneth McKenzie.

Fresh explosions rocked the Kabul airport late Thursday. A Taliban spokesman said the explosions were set off by U.S. forces “to destroy their equipment,” stoking fear that Americans may withdraw before the Aug. 31 deadline Biden set.