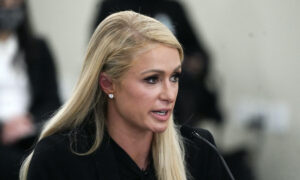 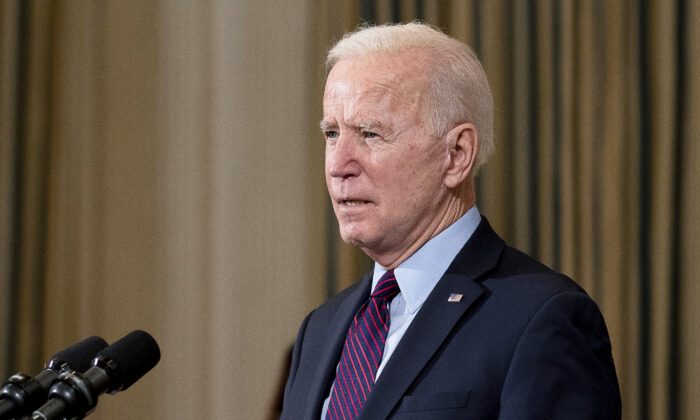 U.S. President Joe Biden delivers remarks on the national economy and the need for his administration's proposed $1.9 trillion coronavirus relief legislation in the State Dining Room at the White House in Washington on Feb. 5, 2021. (Stefani Reynolds-Pool/Getty Images)
AMERICA

White House Press Secretary Jen Psaki said Tuesday that President Joe Biden aims to reopen over half of schools nationwide for “some teaching” in person “at least one day a week” by day 100 of his presidency.

The news comes as parents across America in areas without in-person teaching are desperate for help amid mixed messaging on the issue from the Biden administration, which has left children falling behind academically under lockdown.

Biden’s administration has taken a hands-off approach to school reopenings after vowing during his campaign that he’d see schools resume in-person classes if elected. In December, Biden said he aimed to ensure “a majority of our schools” are open within 100 days.

Psaki told reporters during a press briefing that all schools won’t necessarily fully reopen by day 100 of Biden’s presidency.

“His goal that he set is to have the majority of schools—so, more than 50 percent—open by day 100 of his presidency. And that means some teaching in classrooms. So, at least one day a week,” she said. “Hopefully, it’s more. And obviously, it is as much as is safe in each school and local district.”

The White House Press Secretary noted that the Biden administration is waiting for official guidance on school reopenings to be released by the Centers for Disease Control and Prevention (CDC). The agency’s director said on Feb. 5 that it will be released in the coming week.

“And obviously, once those are put out publicly and concluded, we will look for ways to work with states to ensure that schools are getting the resources they need.”

CDC officials earlier released a summary of recent studies that looked at the effect of reopenings on transmission of COVID-19, the disease caused by the CCP (Chinese Communist Party) virus.

Research both inside and outside the United States shows “little evidence that schools have contributed meaningfully to increased community transmission,” the officials said.

Arguments about the risk of spreading COVID-19 in schools rely on research of asymptomatic spread of the virus. But the research remains scant. An analysis of four such studies concluded that the risk is between zero and 5 percent. But that analysis only pertained to viral spread within a household. A recent paper that estimated nearly 60 percent of cases resulted from asymptomatic spread was based on assumptions regarding symptom onset and infectiousness duration.

Teachers don’t necessarily have to be vaccinated in order for schools to safely reopen, according to CDC Director Rochelle Walensky.

“I also want to be clear that there is increasing data to suggest that schools can safely reopen and that safe reopening does not suggest that teachers need to be vaccinated in order to reopen safely,” she said during a Feb. 3 press briefing.

But Psaki later told reporters that Walensky was speaking “in her personal capacity” and that the official CDC guidance on school reopening has yet to come.

One argument against school reopening is the spread of new mutations of the virus, for example, the CCP virus strain that was first identified in the United Kingdom in December. Initial data indicate that this more-transmissible strain is also more virulent, or harmful, but “that needs to be confirmed,” said Dr. Anthony Fauci, head of the National Institute of Allergy and Infectious Diseases (NIAID), during a Feb. 8 briefing.

In an interview with CBS over the weekend, Biden said that “it’s time for schools to reopen safely.”

Petr Svab and Zachary Stieber contributed to this report.