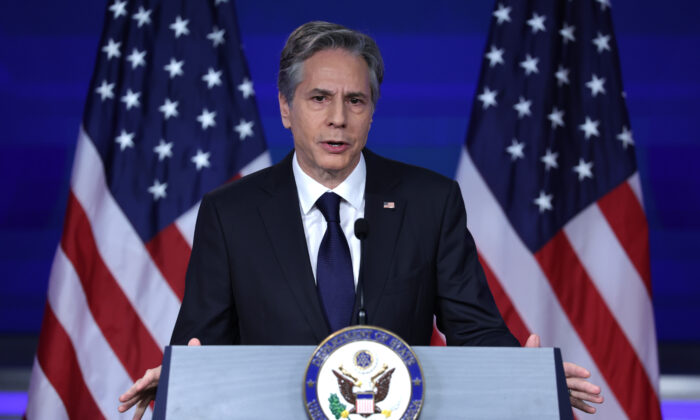 How do you compete with a potential adversary while simultaneously allowing that adversary to steal your most precious technologies? How do you defeat a rival whom you believe to be vital to your own survival?

These are the questions that one is immediately presented with when examining the Biden administration’s long-awaited China policy, which was outlined by U.S. Secretary of State Antony Blinken on May 26, and during which he reiterated that the nation would not seek to break away from China’s economy nor to pursue conflict with its communist regime.

“Competition need not lead to conflict,” Blinken said. “We do not seek it. We will work to avoid it. But we will defend our interests against any threat.”

The much-anticipated policy, which the administration did not describe at length for 17 months, disappointed many who believed that Blinken’s speech merely summarized the actions that the administration had already taken and did not meaningfully present any real change to U.S. policy or strategy regarding China.

Derek Grossman, an Indo-Pacific analyst for the Rand Corporation, said in one tweet that the affair was a “missed opportunity,” and failed to cover any new ground.

Notably, however, the outlining of the Biden administration’s China policy did at least implicitly convey one message: The United States failed to deter both China’s rise and the Chinese Communist Party’s (CCP) increasing aggression.

Indeed, Blinken explicitly stated that the United States wouldn’t interfere with China’s ascent to great power status, that it would seek only to ensure that the CCP adhered to international rules, and also that it knew the CCP wasn’t adhering to those rules.

The new policy did offer something of a rebrand, which Blinken referred to as the “American Model,” and described its underlying strategy in the words “Invest. Align. Compete.” But what do those three concepts really mean?

Perhaps the most controversial aspect of the administration’s newly minted “American Model” was its emphasis on using taxpayer monies to invest in select industries while refraining from actually divesting in trade with China.

“The United States does not want to sever China’s economy from ours or from the global economy, though Beijing, through its rhetoric, is pursuing asymmetric decoupling, seeking to make China less dependent on the world and the world more dependent on China.”

“We will invest in the foundations of our strength here at home,” Blinken said, “our competitiveness, our innovation, our democracy.”

Blinked said that such “strategic investments” would be made in the realms of education, artificial intelligence, biotechnology, and quantum computing, though he did not give any examples of how precisely this investing would be done, in what amount, or to what organizations, or whether or not there a plan.

When he did speak of specific investments to be made under the China policy, Blinken appeared to only speak of two spending bills, both of which were from last year.

The first was the $1.2 trillion infrastructure bill that was created following the failure of the administration to pass its mammoth Build Back Better legislation. The second was the U.S. Innovation and Competition Act, a Senate bill that would increase technology spending by over $100 billion. The House version, the America COMPETES Act, was passed earlier this year, and the two bills are currently before a bicameral conference committee that aims to reconcile the differences between the pieces of legislation.

The administration’s decision not to encourage any decoupling between the United States and China also raises some issue with how strategic such investments will be, given the ability of the CCP to simply steal whatever new technologies the United States develops. That decision, however, may have been driven by two interest groups, the first being major U.S. corporations with business ties to China.

There is a fear among major U.S. companies, not that CCP will steal their technology, or coerce them into different business practices, or use slave labor to produce their goods—but that their investment in China will be lost.

“One of the key vulnerabilities that we’re becoming more and more aware of is the degree to which Wall Street firms and American banks and investment companies continue to see China as this great market or this great investment opportunity,” said Arthur Herman, a senior fellow at the Hudson Institute, a Washington-based think tank.

Likewise, one report from the Harvard Business Review last year stated succinctly that “No executives we’ve met want to see the time, effort, and investment they’ve put into developing a presence in China go to waste.”

Yet another op-ed in Barron’s lamented that decoupling could force companies to choose between following Chinese or American laws.

One report (pdf) by Michael Sobolik, a fellow in Indo-Pacific Studies at the American Foreign Policy Council, said that there were many in the administration who wanted to take a tougher stance on China, but that their voices were drowned out by the more progressive members of Biden’s cabinet, which considers partnership with China to be key to pursuing global climate change initiatives.

In fact, according to Sobolik, the Biden administration failed to enact tough measures that would have clamped down on companies associated with slave labor in China’s Xinjiang region because of a “heated interagency fight … between its national security and climate change team[s].”

Sobolik’s comments suggested that the Biden administration initially considered a total ban on solar products implicated in forced labor in the region, but ultimately watered that stance down to a ban on imports from one major company, Hoshine Silicon Industry.

The Department of Commerce later added three solar companies to the export list, though those companies could dissolve and reform with a new name to evade hardship.

“The message is clear,” Sobolik wrote, “the Biden administration is liable to think twice about sanctioning foreign entities if doing so either threatens the climate agenda or irritates key allies.”

Concerning international alignment, Blinken acknowledged that China has become increasingly aggressive since the ascension of Xi Jinping as Chinese Communist Party (CCP) leader in 2012, but said the United States would work to ensure that the strategic environment around China was favorable to the United States by shaping the environment around it.

“We will align our efforts with our network of allies and partners, acting with common purpose and in common cause,” Blinken said.

“We cannot rely on Beijing to change its trajectory. So we will shape the strategic environment around Beijing to advance our vision for an open, inclusive international system.”

In this regard, the United States does have some clout, though it is fading, and the administration’s decision not to confront China directly on key regional issues such as the defense of Taiwan could make some nations in the region wary of picking sides between the two superpowers.

Still, some headway has been made.

The administration has helped to increase the importance of the Quadrilateral Security Dialogue—an informal grouping between the United States, India, Australia, and Japan—in regional affairs, signed the AUKUS agreement to provide Australia with nuclear-powered submarines, and is working to strengthen the legitimacy of ASEAN in the hopes of aligning more Western-friendly nations in Southeast Asia toward a shared pursuit of open markets and security agreements.

The concept of alignment has historically been something that the United States considered to be a strategic weakness of China which, owing to a strong commitment to its own sovereignty, regularly refuses to change its strategic aims or policies to accommodate other nations.

That has been shifting, however, most notably so with regards to Russia, but also globally.

The CCP’s steadfast devotion to Russia throughout the latter’s ongoing war in Ukraine has proven a contentious point with the international community, and has seen the development of what may be the closest thing to an official ally that China has had under communist rule.

The communist regime also recently attempted to rush a 10-nation Pacific security deal, likely intended to expand its own global military presence and provide it a strategic maritime advantage over the U.S. Navy.

There is also the regime’s Belt and Road Initiative, a trillion-dollar infrastructure investment project used to expand its economic and political influence worldwide, and the so-called “string of pearls” strategy, under which Beijing plans to build a network of several vital ports and military facilities leading from Africa to Hong Kong and which incorporate several choke points for global commerce.

“China is monopolizing strategic choke points in the Indian Ocean region by investing in geopolitically important ports from Hong Kong to Sudan,” one report from the Institute for Security and Development Policy said. “The String of Pearls quite literally encircles neighboring countries, particularly India.”

The United States therefore, has already lost no small advantage in its ability to shape the strategic environment of the Indo-Pacific, and the CCP’s increasing efforts to subsume the interests of smaller nations into its own plans raise doubt as to how the administration will adequately pursue the third leg of its China policy: Competition.

Blinken said that the United States was “well-positioned to outcompete China in key areas” by using its invest and align tactics but, thus far, there seems to be little evidence that there has been any net gain from the administration’s efforts.

The Biden administration has largely continued many of President Donald Trump’s China policies, though it is now considering watering down U.S. tariffs on Chinese goods. It has also drawn fire for not pushing back more strongly against the regime’s rampant industrial espionage efforts, expansionist efforts in the East and South China Seas, and human rights abuses which include genocide.

Moreover, the administration scrapped a Trump-era initiative aimed at combating Chinese espionage on account of accusations of racism, despite a DOJ review that found no evidence of bias in the program.

“Our task is to prove once again that democracy can meet emerging challenges, create opportunity, and advance human dignity,” Blinken said. “The future belongs to those who believe in freedom.”

In all, the strategy of the Biden administration to date might best be described as appeasement. Appeasement to corporate interests, and appeasement to the climate lobby.

But to what end?

Perhaps echoing the sentiments of the progressive members of Biden’s cabinet that suppressed national security interests for climate change legislation, Blinken said that the United States simply could not achieve its global ambitions for climate and healthcare progress without the help of China.

To that end, the United States will apparently work with China against its own interests because it is in the perceived interest of the world.

“China is also integral to the global economy and to our ability to solve challenges from climate to COVID. Put simply, the United States and China have to deal with each other for the foreseeable future.”

“Even as we invest, align, and compete, we’ll work together with Beijing where our interests come together,” Blinken added. “We can’t let the disagreements that divide us stop us from moving forward on the priorities that demand that we work together, for the good of our people and for the good of the world.”