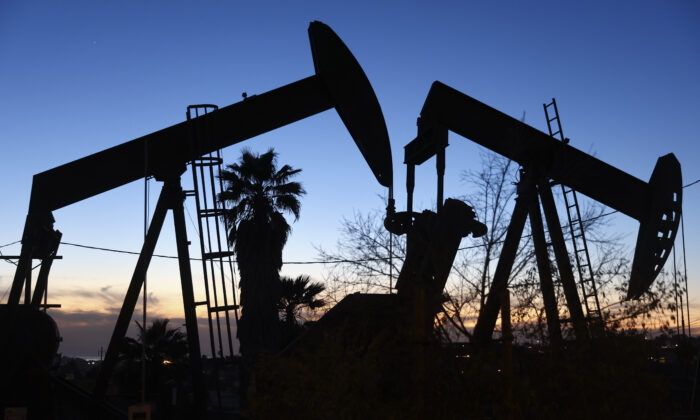 The oil and gas industry is looking to the future with caution, and plans for expanding production of fossil fuels appear to be limited.

At the Enercom Energy Investment conference in Denver this week, the oft-repeated mantra among CEOs was that they will use the bulk of their profits to pay down debt and return money to investors through stock buybacks and dividend payments, with significantly less emphasis on major new capital investments. In addition, executives highlighted their commitment to environmental, social, and governance (ESG) principles for producing cleaner energy and addressing social justice issues.

As Democrats in Congress prepare to allocate $369 billion via the Inflation Reduction Act to subsidize electric cars and wind and solar energy, America’s oil and gas producers face an uphill battle. A shrinking supply of capital, a hostile regulatory environment, and shortages of materials and labor are creating significant hurdles against new drilling.

“I don’t want subsidies for our industry; we don’t need subsidies in our industry,” Chris Wright, CEO of Liberty Energy, told The Epoch Times. “We just don’t want barriers standing in the way of us providing the energy that people in the world want and need.”

Among those barriers are banks and investors cutting back financing for new fossil fuel projects, due to both economic and political factors. In line with the ESG movement, 114 banks, collectively representing 38 percent of global banking assets, signed the Commitment Statement of the UN Net-Zero Banking Alliance, in which they pledged to “transition” their lending portfolios to reduce greenhouse-gas (GNG) emissions and reach net-zero GNG emissions by 2050 or sooner. American banks that signed this pledge include JPMorgan Chase, Bank of America, Citibank, Wells Fargo, Goldman Sachs, and Morgan Stanley.

In response, West Virginia and Texas recently barred banks that discriminate against fossil fuel companies from getting municipal banking contracts in their respective states. On July 28, for example, West Virginia State Treasurer Riley Moore announced that JPMorgan, Goldman Sachs, BlackRock, Morgan Stanley, and Wells Fargo would be placed on a Restricted Financial Institution List because they “are engaged in boycotts of fossil fuel companies, according to new state law, and are no longer eligible to enter into state banking contracts.”

“Each financial institution placed on the Restricted Financial Institution List today has published written environmental or social policies categorically limiting commercial relations with energy companies engaged in certain coal mining, extraction or utilization activities, rather than considering the financial or risk profile for each company,” Moore said in an official statement. “While the ‘Environmental, Social and Governance’ or ‘ESG’ movement might be politically popular in California or New York, financial institutions need to understand their practices are hurting people across West Virginia.”

Last week, 19 state attorneys general sent letters to BlackRock CEO Larry Fink declaring that his efforts to impose the ESG agenda on companies whose shares it owns run counter to its fiduciary obligations to pensioners, intentionally harm America’s energy companies, and, to the extent that financial companies collude in this effort, raise anti-trust concerns. BlackRock is the world’s largest asset manager, with approximately $10 trillion in assets under management.

In a letter to Fink, Arizona Attorney General Mark Brnovich wrote, “BlackRock appears to use the hard-earned money of our states’ citizens to circumvent the best possible return on investment, as well as their vote. BlackRock’s past public commitments indicate that it has used citizens’ assets to pressure companies to comply with international agreements such as the Paris Agreement that force the phase-out of fossil fuels, increase energy prices, drive inflation, and weaken the national security of the United States.”

Oil and gas executives say the push to divest from fossil fuels by global organizations like Climate Action 100+, the UN Net-Zero Banking Alliance, and the Glasgow Financial Alliance for Net Zero is having its intended effect.

“Our industry is being starved for capital,” Anthony Gallegos, CEO of Independence Contract Drilling, told The Epoch Times, noting that banks are increasingly unwilling to provide revolving lines of credit or asset-based lending facilities [ABLFs] to the oil and gas industry. “There’s probably a third as many banks today that are willing to provide revolvers and ABLFs to [oil and gas] service companies compared to what there would have been six years ago,” he said. “There are investors, there are endowments, there are limited partnerships, some of which have historically invested in energy, that today have a mandate that they cannot make investments in fossil fuel industries.”

“The concern that the State of West Virginia, the State of Texas, and other states have had about financial institutions trying to dissuade investment I think is very real,” Wright said. “What that impacts most is the smaller or rising players that count on bank debt financing and reserve-based lending [RBL]. There is massively less RBL capital today than a few years ago; there’s a number of big European banks that were players in this space that have pulled out; there are American banks that want to show a decline in the percent of their portfolio that’s in oil and gas; there is less private equity capital because university endowments and CalPERS, CalSTRS, and other state pension funds, are divesting from oil and gas.”

In response to state actions, several U.S. banks recently denied they are doing anything to reduce financing for fossil fuels. Goldman Sachs stated in a July letter to West Virginia’s treasurer that it provided more than $118 billion in financing to fossil fuel companies. JPMorgan wrote that it had more than $42 billion in credit exposure to oil and gas companies.

In an apparent reversal of BlackRock’s position in 2020 that “we will be increasingly disposed to vote against management and board directors when companies are not making sufficient progress on sustainability-related disclosures and the business practices and plans underlying them,” BlackRock announced in May that it will likely support fewer climate-related corporate votes in 2022 than it did in 2021.

In addition to the ESG movement, the oil and gas industry is also emerging from a period of over-investment in new fracking projects a decade ago, which together with increased output in the Middle East caused oil and gas prices to fall sharply in 2016 and then collapse in 2020 during pandemic lockdowns, forcing many oil and gas companies into bankruptcy. This has caused many investors to take a more cautious approach, particularly now that the economy is slowing and oil and gas prices have fallen from their peaks in the spring.

“I don’t think you’re ever going to see capital flow into this industry the way it did in 2012 through 2014,” Gallegos said. “Investors have made it clear: ‘We’re not here to fund your growth just for growth’s sake; if we’re going to give you money, you’re going to have to demonstrate a pathway toward generating returns where we’re seeing something back as investors.’”

Accordingly, CEOs are now more focused on returning cash to their equity and debt investors.

Fitch Ratings Director Neil Stirrat said that oil and gas companies were “exercising capital discipline” and using profits to repay debt and repurchase equity, with only a “marginal” increase in capital expenditures. This increase, about 15 percent on average across the industry, was approximately equal to the increase in companies’ costs due to inflation.

In addition to less generous investors, America’s fossil fuel companies faced a hostile regulatory environment. A June 28 report from the Heritage Foundation, for example, noted a rush by oil and gas companies in the final months of 2020 to secure drilling permits before the Biden administration took control.

“To date, Biden is the only president in modern history not to have held a single oil and gas lease sale on federal lands despite clear direction from Congress to do so quarterly,” the report stated. “While the Department of Interior is being forced by court order to hold a lease sale this quarter, it increased fees by 50 percent and decreased the amount of available acreage for drilling by 80 percent—even as it cut fees and red tape for renewable ‘green’ energy production.”

Biden has also used other agencies, including the Securities and Exchange Commission (SEC) and the Environmental Protection Agency (EPA), to discourage investment in new oil and gas projects. The SEC issued a mandate in March that all listed companies must produce audited reports detailing their fossil fuel emissions, as well as those of suppliers and customers, together with their plans to reduce them. The SEC claimed that it was compelled to issue this mandate because “investors representing literally tens of trillions of dollars support climate-related disclosures.”

Government Spends Hundreds of Billions to Support Wind and Solar

Besides government policies and global money-club boycotts, the hundreds of billions in subsidies for renewable energy further undermine oil, gas, and coal companies’ ability to compete. This includes the $1.2 trillion Infrastructure Investment and Jobs Act, the invocation by Biden of the Defense Production Act, and the Inflation Reduction Act, currently being debated in the House of Representatives after being passed by the Senate.

In return for voting for green subsidies in the Inflation Reduction Act, Sen. Joe Manchin (D-W. Va.) reportedly negotiated a “side deal” that Congress would later approve a lessening of the regulatory burden for fossil fuels, including more congressional action to attempt to force the Biden administration to sell more oil and gas leases and issue new drilling permits. However, many doubt that Manchin will ever receive his part of the bargain, given that Democrats were virtually unanimous in rejecting a GOP-backed bill to streamline permit approvals last week.

The version of the Inflation Reduction Act that Manchin approved even granted the EPA the right to regulate carbon emissions. This was a critical issue because the U.S. Supreme Court’s landmark ruling in West Virginia v. EPA stated that the EPA’s decree that electric utilities must transition to renewable energy and away from coal and other fossil fuels was not legal because Congress never gave the EPA the authority to regulate carbon emissions. The Inflation Reduction Act would have given the EPA this authority, invalidating the Supreme Court’s decision, which had ruled in favor of Manchin’s home state.

Sen. Shelley Moore Capito (R-W. Va.) offered an amendment, which all Democrats, including Manchin, voted against, to remove from the bill the provision that granted sweeping new powers to the EPA. When that effort failed, Capito then challenged the provision’s compliance with budget reconciliation rules, which allow the Senate to bypass the filibuster. The Senate parliamentarian agreed with Capito, and the language granting the EPA new authority was removed from the bill.

“You could make the argument, and I’m sure Manchin would make it, that we’re getting some of those barriers out of the way for hydrocarbon development, and that would on the margin be positive,” Wright said. “But I balance that with the certainty that we’re going to spend $300 billion subsidizing unreliable, more expensive, grid-destabilizing energy, and if you subsidize it heavily enough, you’re going to get it no matter how destructive it is to our grid. No matter how negative it is, the subsidies are big enough that it is in the economic interests of those parties to build it, and we’re going to pay the price.”