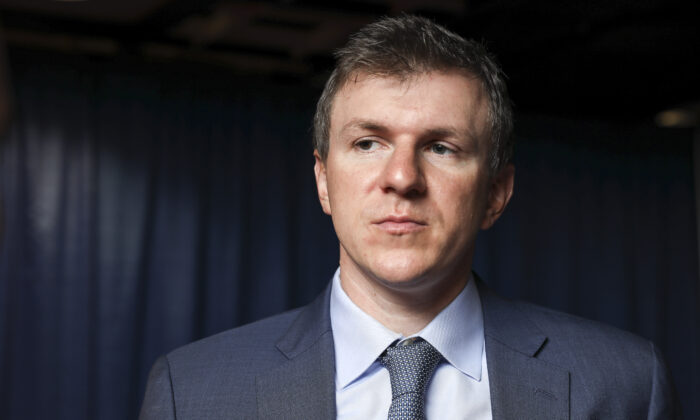 James O'Keefe, the founder of Project Veritas, is seen in Washington on Oct. 12, 2019. (Samira Bouaou/The Epoch Times)
By Zachary Stieber

A federal judge shouldn’t accept a proposal by Project Veritas to appoint a special master after FBI agents raided the homes of journalists linked to the organization, U.S. government attorneys argued in a Nov. 19 court filing.

After agents executed search warrants on several homes linked to Project Veritas, including a residence of founder James O’Keefe, the group’s attorneys asked a judge to appoint a special master, or a retired judge, to sift through material seized by federal agents and separate out certain files. Agents seized cell phones and other electronic devices from O’Keefe and two former Project Veritas journalists earlier this month, according to court documents.

The raids appear to have been motivated by the apparent belief that the group had committed crimes in its handling of a diary that was said to be penned by Ashley Biden, daughter of President Joe Biden. Project Veritas stated that it was given the diary in 2020, but turned it in to law enforcement when it couldn’t verify its authenticity.

“The extraordinary actions taken by the government, most significantly the use of search warrants to seize newsgathering materials from journalists, appear to be founded on the premise that the diary does belong to Ashley Biden. That fact, however, does not warrant the exercise of federal criminal authority to investigate and punish journalists who merely obtained the diary and possessed it temporarily,” attorneys for the group wrote in a motion to the court.

There were also no limits imposed in the search warrants on the government’s access to materials it seized, which enables it to access privileged material, whistleblower material, and material about news investigations, according to the attorneys.

“The appointment of a special master to review the seized materials is necessary to protect core First Amendment interests and attorney-client privileged information,” they said.

District Court Judge Analisa Torres, an Obama appointee, halted the extraction of files from the seized devices while she is considering the request.

In the Nov. 19 filing, government attorneys said they’ve already employed a “filter team” of government employees to sift through the seized materials. They also said Project Veritas lawyers “have offered no persuasive explanation why that practice would not be sufficient here to protect any qualified journalistic privilege or First Amendment privilege that might exist or to protect any attorney-client or work product privilege.”

The warrants were supported by detailed affidavits and authorized by a federal magistrate judge, according to government attorneys.

Agents say they’re investigating whether Project Veritas was involved in a conspiracy to transport stolen property across state lines. Journalists are legally allowed to publish stolen materials as long as they themselves didn’t steal them, according to a Supreme Court ruling in Bartnicki v. Hopper, which has been upheld in subsequent rulings, Project Veritas attorneys said.

However, the government indicated that it has reason to believe that Project Veritas was involved in acquiring the diary. The proof backing this claim was redacted in the version of the filing that was publicly released.

“Project Veritas is not engaged in journalism within any traditional or accepted definition of that word. Its ‘reporting’ consists almost entirely of publicizing non-consensual, surreptitious recordings made through unlawful, unethical, and or/dishonest means,” government attorneys said.

Project Veritas has until Nov. 24 to file a response.