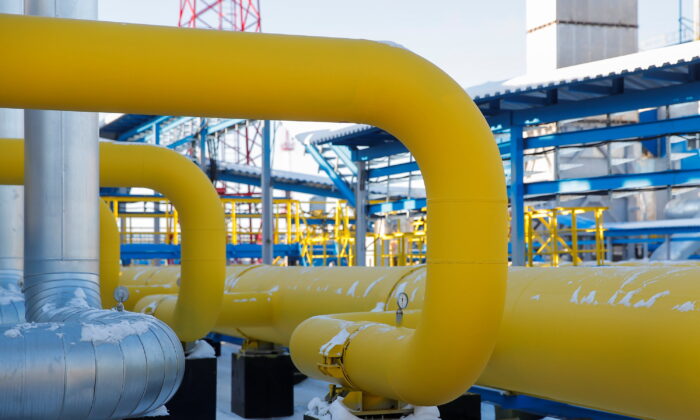 Gas pipelines are pictured at the Atamanskaya compressor station, a facility of Gazprom's Power Of Siberia project outside the far eastern town of Svobodny, in the Amur region, Russia, on Nov. 29, 2019. (Maxim Shemetov/Reuters)
Viewpoints

The proposal weakens pressure on China, India, and Japan to join the ban

Russia’s oil and gas revenues are fueling its war in Ukraine. The money that China, India, Germany, Japan, and others provide Moscow for their hydrocarbons goes to building the weapons that kill Ukrainian children. It’s wrong and should stop.

Many countries delay or defect from sanctions because they depend on Russia for cheap energy. Despite Russia’s invasion of Ukraine in 2014, continued purchases from Moscow, even now, give Vladimir Putin a green light to take yet more territory in 2022.

Canada just released a gas turbine to Germany, for example, so that it can import more Russian gas. Ukraine denounced the transfer, but this enabling of Russian gas exports has the Biden administration’s support. If it might decrease the cost of natural gas, lower inflation, and mitigate the risk of a global recession—even just a little and in the short term—it will get the attention of the Biden reelection committee.

The sanctions that the United States, Britain, and European Union have already imposed on Russia—and are gradually increasing up to early 2023—are important. But they leave demand in place, particularly in China, India, and Japan, which have no current plans to punish Moscow. In fact, the former two are gorging on cheap Russian oil and gas that is now sold at massive discounts.

As the European ban comes into effect, it could cut Russian energy exports with no other place to go. This would restrict supply to such an extent as to cause a global recession, according to the administration.

Enter President Joe Biden, who says he has a plan for a price cap on Russian oil to fix the problem. He proposed it to the G-7 group of wealthiest nations in late June, and they agreed to explore the idea.

U.S. Treasury Secretary Janet Yellen is in the lead, and shopping the cap around Asia, along with U.S. Energy Secretary Jennifer Granholm.

The plan involves the creation of a global buyers cartel, or monopsony, to enforce a below-market price cap for Russian oil. The cap would range from approximately $40 to $60 per barrel. Theoretically, the price would only cover Russia’s marginal cost of production, denying Moscow any significant profit with which to prosecute its war in Ukraine.

While the United States, Britain, and Canada already banned the import of Russian oil, and supported Europe’s move to ban seaborne oil by December 2022 and refined fuels by early 2023, the price cap could be seen as adding intermediate pressure on Russia before the bans take effect.

But given the goal of the cap to decrease inflation and mitigate the risk of recession, it will more likely replace the bans long term with something that imposes fewer costs on Russia.

The Biden administration is using scare tactics to push the idea.

On July 12, the Treasury Department warned that oil prices could jump if the price cap is not enacted. Pro-Democrat media is publishing predictions that oil will increase from the current $100 a barrel to between $140 and $200 a barrel. That would likely lead to a global recession, according to the left-leaning Brookings Institute.

But Brent crude dropped from $123 a barrel last month to $104 on Tuesday. That could be due to market expectations of a decrease in demand due to “demand destruction” from a recession. When demand causes global warming, demand destruction could be a good thing.

But China and India are ramping up Russian oil imports and future emissions. In late June, the bans resulted in Russian oil selling at a discount, with prices between $70 and $80 per barrel.

Over the last three months, according to Bloomberg News, China doubled its imports of Russian oil, and India increased imports by about five times. As a result, Russia receives about $600 million in daily oil revenues.

The price cap would theoretically institutionalize, legitimize, and enforce the Russian oil discount, folding defectors into unified pressure on Moscow to end its war.

Enforcement could be achieved through a refusal of the West to finance, ship, and insure Russian cargoes, or the imposition of secondary sanctions against shipping and banking companies globally that facilitate Russian exports. Difficulties to enforcement include the likelihood that Russia and importing countries would offer their own sovereign insurance and services.

If that were overcome, the Biden plan could develop into a counterbalance against the Organization of the Petroleum Exporting Countries (OPEC), which would give the United States, Europe, and other energy importers a price break on oil more broadly. It might eventually deprive dictators in not only Moscow, but Riyadh, Tehran, and Caracas, of at least some of the oil income they use to fight wars and repress people.

But the administration is not talking about a permanent buyers club, and the cap entails six major risks, or gambles, that it wishes you didn’t know about.

As discussed in the second part of this series, these include empowering China and Russia, weakening alliance unity, hurting energy independence and the environment, and increasing long-term inflation—all for a short-term economic fix to increase the chance of Biden’s reelection.