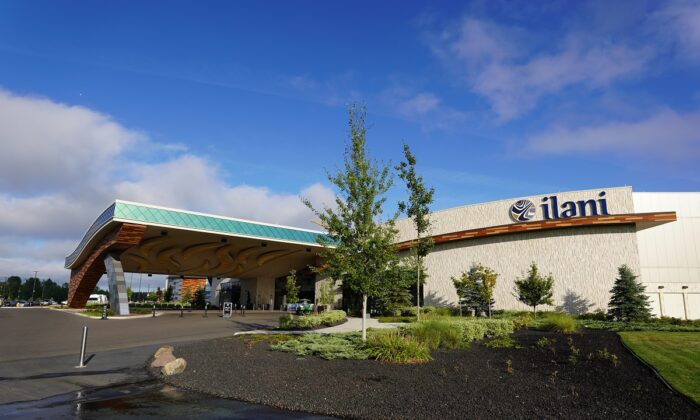 The Ilani Casino, which is operated by the Cowlitz Indian Tribe, is located near Ridgefield, Wash., on Aug. 2, 2020. (Steven Baltakatei Sandoval via Wikimedia Commons/CC BY-SA 4.0)
Judiciary

The Biden administration is siding with two Native American tribes against Texas in a long-running dispute over the tribes’ right to run gaming operations on their tribal land in the state.

The case before the U.S. Supreme Court is known as Ysleta Del Sur Pueblo v. State of Texas. The U.S. Court of Appeals for the 5th Circuit ruled against the tribes, finding that the state was within its legal rights to bar gaming startups by the tribes. Gaming is an industry euphemism for gambling.

The tribes, the Tigua in El Paso and the Alabama–Coushatta Tribe of East Texas, are appealing the decision to the Supreme Court. It’s unclear when the court will decide if it will hear the case.

On Feb. 22, the Supreme Court invited the Biden administration to file a brief expressing its views on the case.

Half a year later, on Aug. 25, Acting Solicitor General Brian H. Fletcher filed a friend-of-the-court brief in the case.

The Biden administration believes that it’s unfair that the two Texas tribes don’t have the same gaming rights that many other tribes around the nation already enjoy.

The Supreme Court should “correct the court of appeals’ erroneous construction of the [statute],” which has “impaired the uniformity of a federal regulatory scheme, has uniquely disadvantaged two Indian tribes, and has generated repeated litigation and substantial confusion for nearly three decades,” Fletcher stated in the brief.

Texas, which generally opposes gambling, filed a supplemental brief on Sept. 3 arguing that the appeals court made the correct decision and urging the Supreme Court to decline the case.

The law governing Native American tribes in the United States is complex.

The federal government and Indian tribes have a special relationship. As the Supreme Court found in U.S. v. Mitchell (1983), “a general trust relationship between the United States and the Indian people” has long existed. That the U.S. government has a duty to honor its treaty commitments is called the doctrine of trust responsibility.

The trust responsibility between the two tribes and the federal government had been terminated by Congress by the 1960s. A federal statute from 1986 restored the federal trust responsibility, along with the sovereign status and the lands of the two tribes, but contained provisions preventing the tribes from getting involved in the gaming business.

In 1988, Congress approved a separate statute, the Indian Gaming Regulatory Act (IGRA), which created a regulatory framework securing a tribe’s right to offer certain gaming activities on its sovereign land if those activities are otherwise legal in the state where they take place.

The 5th Circuit Court of Appeals held that bingo games at Speaking Rock Entertainment Center in El Paso were unlawful and that Tigua gaming rights were governed by the 1986 law, not IGRA, which meant both of the Texas tribes were therefore barred from opening casinos, according to a summary in trade publication Casino.org.

The IGRA allows tribes to run bingo-based games under a category it calls Class II gaming. Class III gaming, such as table games and slot machines, can’t be offered unless the tribal and state governments enter into a compact.

The two tribes “have continued with gambling operations despite the court rulings, though they have occasionally closed their doors during legal fights,” El Paso Matters reported.

“The machines currently used by the Tigua and Alabama–Coushatta are based on bingo games, a form of gambling that is legal in Texas. Court orders currently allow the tribes to continue gambling operations while appeals are pending.”

A law professor said if the two Texas tribes were to win in the Supreme Court, there could be a ripple effect across the nation.

“If the Supreme Court takes the case, and if it finds for the tribe, then every other tribe that currently is foreclosed from offering gambling because of a pre-IGRA law would have a basis for arguing that the Court’s new decision supports their getting gambling,” Nova Southeastern University Law professor Bob Jarvis told Casino.org.

“I think this would be a quite fair result, because no one at the time of these laws could have foreseen the advent of IGRA.”