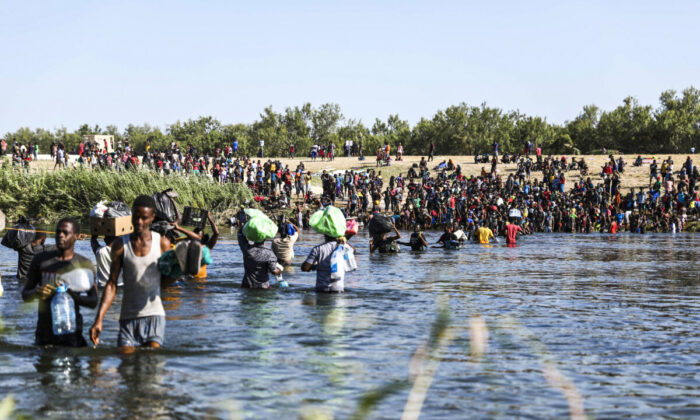 President Joe Biden’s administration is sending notices to tens of thousands of illegal immigrants who were released into the U.S. interior without being given a date to appear in court, the government confirmed to The Epoch Times.

Immigration and Customs Enforcement (ICE) “is mailing charging documents to place noncitizens in removal proceedings who have been paroled or released under prosecutorial discretion by Customs and Border Protection,” an ICE spokesman told The Epoch Times in an email.

The illegal immigrants, numbering about 78,000, will receive information packets, including documents informing them that their case will be processed via deportation proceedings and directing them to report to their closest ICE office.

“Action will be taken against those that do not appear consistent with the law and department priorities. By mailing out these charging documents, ICE is initiating removal proceedings in a timely way,” the spokesperson stated.

Chad Wolf, former head of the Department of Homeland Security (DHS), said the move showed the Biden administration had been dysfunctional in its handling of immigration enforcement.

“Since this admin could not effectively manage the border, DHS must now expend considerable resources to track down illegal immigrants,” he wrote on Twitter.

The U.S. immigration system, already burdened by a backlog of more than 1.4 million cases, has seen unprecedented illegal border crossings since Biden entered office in January.

The previous fiscal year record of illegal immigrant apprehensions was broken in September, and a new yearly record is all but certain to be set.

Normally, when illegal immigrants are apprehended by Border Patrol and they wish to claim credible fear of returning to their home country, or the first step in the asylum process, an asylum officer will conduct a credible fear screening.

Illegal immigrants who pass the screening are released into the U.S. interior and given one year to formally apply for asylum—which a significant number fail to do.

Under the crushing volume of illegal entries this year, however, the Biden administration has released hundreds of thousands of illegal immigrants without official documents, giving them a notice to report to a local ICE office within 60 days.

Jessica Vaughan, director of policy studies at the Center for Immigration Studies, wrote on Twitter that it would be interesting to see how many of the notices to appear are returned to the government, not to mention how many illegal immigrants actually show up in court.

Those who don’t comply with the notices face deportation, but can appeal. However, with a bogged down court system, she said, deportation is unlikely to happen quickly, if at all.

Amy Fischer, advocacy director at Amnesty International USA, told CBS, which first reported the mass mailings, that she was concerned immigrants may not receive the notices from Customs and Border Protection (CBP).

“We know that when people are entering, they give CBP an address and it’s typically an address of where they know somebody in the United States. But that doesn’t mean that it is where they will reside,” she said. “We also know that CBP has a long history of writing down inaccurate information.”

ICE has declined to say how many people were given the lower-level notices to report, and a Freedom of Information Act request for the data hasn’t yet been returned.

“Obviously, the better practice would be to have individuals be noticed to appear as opposed to noticed to report,” Chris Magnus, Biden’s nominee to head CBP, told a Senate panel last month.

Magnus, who said he wasn’t sure about the legal basis for issuing notices to report, blamed a dearth of asylum officers and immigration judges, and a “broken” immigration system on the change in policy.

Magnus also refused to say the situation at the border constitutes a crisis, a move that drew scorn from Republican lawmakers.