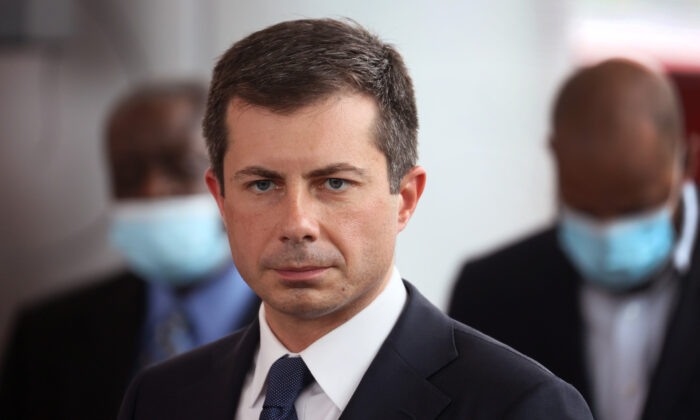 U.S. Transportation Secretary Pete Buttigieg listens to a question during a press conference following a tour of a South Side transportation hub in Chicago on July 16, 2021. (Scott Olson/Getty Images)
US News

U.S. Transportation Secretary Pete Buttigieg said on July 10 that the Biden administration has completed a string of investigations into several airlines over the alleged failure of the airlines to issue passenger refunds amid a rise in flight delays and cancellations.

Buttigieg told Fox Business that while there was some improvement in the number of cancellations and delays over the Independence Day weekend from June 30 to July 4, these figures were “still higher than they should be” and the situation is still “not to an acceptable level.”

“We have just concluded another 10 investigations on airlines on these issues and have launched another 10 or so that we’re going to pursue to make sure that the consumers and passengers are protected,” Buttigieg said.

In September 2021, the U.S. Department of Transportation (DOT) said it had 18 pending investigations against airlines over complaints that they failed to provide timely refunds during the COVID-19 pandemic.

The airlines being investigated were not identified.

In November 2021, Air Canada agreed to a $4.5 million settlement with the DOT’s Office of Aviation Consumer Protection to resolve an investigation into claims of extreme delays to thousands of air passengers’ refunds for flights to or from the United States that the carrier canceled or significantly changed.

Buttigieg had previously warned that Americans could face “challenges” when traveling over the July 4 holiday amid chronic labor shortages, despite airlines receiving over $50 billion in COVID-19 relief aimed at keeping employees at work during the pandemic.

Buttigieg said the airline labor force had been largely reduced by a number of pilots retiring early.

Fox News host Mike Emanuel noted on July 10 that current law requires U.S. commercial pilots to retire by age 65, adding that lawmakers such as Sen. Lindsey Graham (R-S.C.) are looking into the possibility of raising that age to 67 to help alleviate further shortages.

Emanuel also cited an NBC News report forecasting that by 2029, not a single member of the baby boomer generation will be legally allowed to fly a commercial plane.

When asked if he agreed that such legislation should be introduced, Buttigieg firmly said he would not support this, citing safety issues.

“These retirement ages are there for a reason, and the reason is safety,” Buttigieg said. “I’m not going to be on board with anything that could compromise safety. Now, what’s clearly the case is we need to cultivate, train, and support a new generation of qualified pilots.”

“The answer is not to keep the baby boomer generation in the cockpit indefinitely,” he continued. “The answer is to make sure we have as many and as good pilots ready to take their place, to have a stronger pipeline.”

Buttigieg added that the Biden administration is backing up that commitment with Federal Aviation Administration (FAA) programs to support high school and college aviation curriculum.

“Of course, ultimately it’ll be for the airlines and those employers to hire and retain excellent talent,” he said.

Buttigieg’s comments come as airlines are facing a wave of complaints from customers over increased waiting times at check-in, crowded airports, and flight delays.

There were 662 delayed flights and 157 cancellations among incoming, outgoing, and domestic flights in the United States as of the morning of July 11, according to the tracking site FlightAware.

“We’ll collaborate with airlines when they’re ready to take steps that are positive and proactive, whether that’s improvements in pay that are helping with hiring or flexibility in customer service,” Buttigieg told Fox News Sunday.

Industry group Airlines for America said on July 10: “We look forward to working with the federal government to identify and resolve shared challenges to minimize disruptions and ensure safe, seamless travel.”

While the Biden administration is seeking to ensure that passengers are sufficiently reimbursed for delays and cancellations to air travel, airlines have pointed to the air traffic control (ATC) system’s inability to handle unpredictable weather and heavy air traffic amid a lack of air traffic control personnel.

United Airlines CEO Jon Roitman said in a July 7 letter to employees that staffing was in part to blame for thousands of delays and cancellations in recent months.

“We estimate that over 50 percent of our delay minutes and 75 percent of our cancels in the past four months were because of FAA traffic management initiatives—those have been particularly acute in Newark and Florida,” Roitman said, according to Insider. “These ATC challenges can not only disrupt the schedule, but they also cause us to burn crew time throughout the month.”