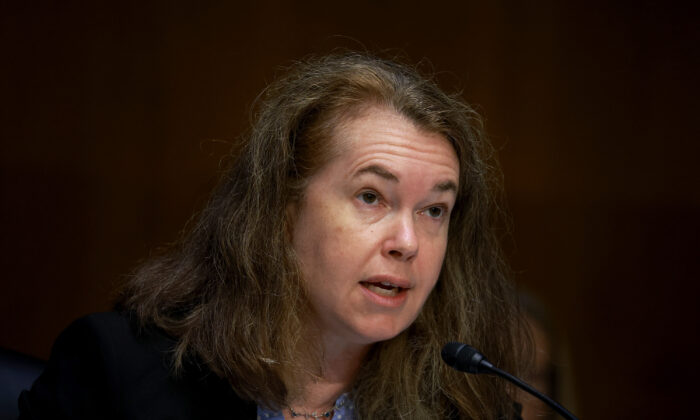 Dawn O'Connell, assistant secretary for preparedness and response at the Department of Health and Human Services, speaks during a Senate hearing on Capitol Hill in Washington on June 16, 2022. (Joe Raedle/Getty Images)
Executive Branch

The Biden administration plans to extend the emergency declaration over COVID-19 before it expires, a Department of Health and Human Services (HHS) official indicated on June 16.

Dawn O’Connell, HHS assistant secretary for preparedness and response, said during a Senate hearing that the administration is sticking with its promise to give states ample notice prior to terminating the public health emergency declaration.

“We will give 60 days’ notice before it comes down,” O’Connell told Sen. Richard Burr (R-N.C.), the top Republican on the Senate Health Committee.

The emergency was declared by then-Health Secretary Alex Azar on Jan. 31, 2020. Azar, a Trump appointee, repeatedly extended the declaration.

Health Secretary Xavier Becerra, an appointee of President Joe Biden, has continued the trend. Becerra last extended the emergency on April 12 for 90 days. That means it will expire in mid-July unless it is extended again.

“It expires July 15th. Do you intend to extend that?” Burr asked Dr. Rochelle Walensky, head of the Centers for Disease Control and Prevention.

Walensky said that there “is no longer a public health reason to bar people from entering this country,” defending her decision to rescind Title 42, which enables quick expulsion of illegal immigrants on grounds they may have COVID-19.

A federal judge in Louisiana has blocked the Biden administration from lifting Title 42.

Walensky also said that she “misspoke” when she said that “there is no longer a public health emergency” while speaking to another senator, who cut her off. She then deferred to O’Connell, who works under Becerra at HHS.

“The secretary declared it in January of 2020, the previous secretary. It’s been extended multiple times. One of the commitments we’ve made in this administration is that we are going to give states and local governments 60 days’ notice before we take it down. And deciding whether to take it down we’re in daily communication with our clinicians, our scientists, the folks on the ground,” O’Connell said.

“We continue to be in touch to understand whether these are still necessary. As Dr. Walensky said, the department will come together and make that decision or recommendation to the secretary for him to decide,” O’Connell said.

The number of daily COVID-19 cases, hospital admissions, and deaths dropped sharply following fresh peaks in January after the Omicron variant of the CCP (Chinese Communist Party) virus, which causes COVID-19, became dominant in the United States. The number of vaccinated people, meanwhile, has continued to rise. Put together, some experts assert there is no longer an emergency, though not all agree.

Burr said he planned to write a letter to Becerra to ask what the criteria are to end the emergency declaration.

“I would only point out that the guidance that we currently have does not suggest there is a public health emergency.”