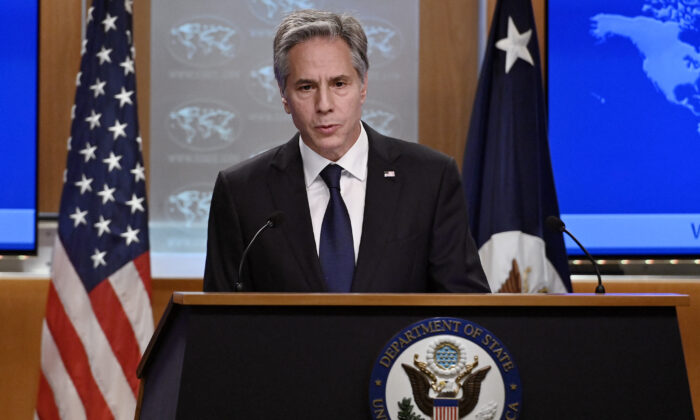 U.S. Secretary of State Antony Blinken speaks during a press conference at the State Department in Washington on July 27, 2022. (Olivier Douliery/AFP via Getty Images)
Europe

“We put a substantial proposal on the table weeks ago to facilitate their release. Our governments have communicated repeatedly and directly on that proposal,” Blinken told reporters in Washington.

Russian arms dealer Viktor Bout, convicted of conspiring to kill Americans and supporting terrorists in 2011, also would be freed in the deal, according to reports.

Bout was described by then-Attorney General Eric Holder as “one of the world’s most prolific arms dealers.”

The U.S. government in April reached a deal that returned former U.S. Marine Trevor Reed, who had been imprisoned in Russia in 2019, to the United States in exchange for Russian pilot Konstantin Yaroshenko, who was in U.S. prison on drug charges.

Griner, who plays in the WNBA as well as in Russia during the league’s off-season, was arrested in February for allegedly trying to bring vape cartridges containing oils derived from cannabis through a Moscow airport. She pleaded guilty in July to drug charges and could face up to 10 years in prison.

Whelan was sentenced to 16 years in prison on charges of espionage in 2020. He has proclaimed his innocence.

Both have been improperly detained, according to U.S. authorities.

“We of course want to see those who are wrongfully detained be released and be able to return home. At the same time, it’s important that we work to reinforce the global norm against these arbitrary detentions,” Blinken said.

“I believe we can actually fulfill both imperatives.”

Blinken declined to outline the specific proposal the United States has made to Russia, out of concern that doing so would make it more difficult for it to advance.

President Joe Biden has been directly involved in the efforts and signs off on any proposal concerning Americans detained abroad, the secretary of state said. As part of the negotiations, Blinken plans to speak with Russian Foreign Minister Sergei Lavrov in the near future.

U.S. and Russian officials have had little contact since Russia invaded Ukraine in February.

The Whelan family said in a statement to news outlets that it appreciates the Biden administration seeking Whelan’s release.