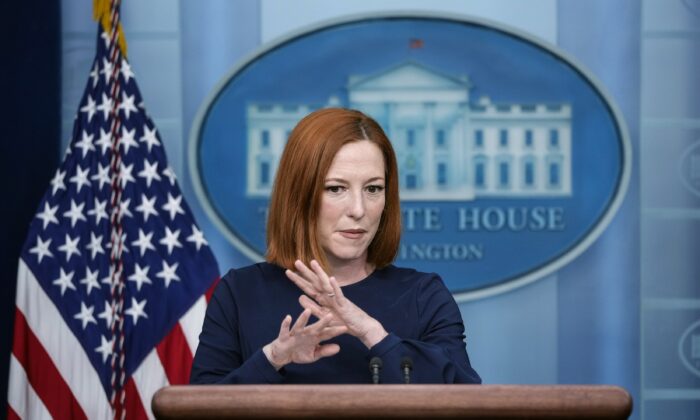 President Joe Biden’s administration and one of the top Democrats in Congress are monitoring the trucker convoys that plan to converge on the Washington area as soon as Feb. 23.

The administration, including the Department of Homeland Security, has “been monitoring this closely,” White House press secretary Jen Psaki told reporters at the White House on Tuesday.

The administration has been working with federal, state, and local partners “to continuously assess the threat environment and keep our communities safe,” with efforts including “enhanced intelligence sharing, a critical incident response plan for the U.S. Capitol, a regional security assessment, and a simulation experiment that developed data-driven recommendations to bolster regional security,” Psaki added.

At least one convoy is planning to disrupt traffic in the capital region starting Wednesday, while one of the largest ones was slated to take off on the same day from California and arrive in the region on March 5.

The convoys, inspired by protests in Canada, are protesting against COVID-19 vaccine mandates and other Biden administration policies.

Federal, state, and local authorities have been preparing for the convoys. Defense Secretary Lloyd Austin approved the deployment of hundreds of National Guard personnel to help with duties including traffic control, a Guard spokesperson said late Tuesday.

Fencing is also being reinstalled around the Capitol building, NTD reported. The fence is the same type erected around the building following the Jan. 6, 2021, Capitol breach. It was taken down later in 2021.

Members of Congress are also keeping tabs on the convoys.

House Speaker Nancy Pelosi (D-Calif.) is “monitoring the situation closely but deferred to the USCP, which is in charge of security,” her spokesman told Fox News. USCP stands for U.S. Capitol Police.

Del. Eleanor Holmes Norton (D-D.C.) said she was set to receive a briefing from USCP Police Chief Thomas Manger on preparations for the convoy and Biden’s State of the Union address, which is scheduled for March 1.

“While temporary fencing due to specific and credible threats is a common-sense precaution, I’d like to ensure, even before it is erected, that there are no plans to make the fence permanent,” Norton said in a statement, adding that she wanted to discuss how USCP will “keep the Capitol—and D.C. residents—safe from threats related to the trucker convoy and next week’s State of the Union address.”

Republicans have indicated support for truckers, some of whom do not appreciate the border vaccine mandates recently imposed by U.S. and Canadian authorities. Among the bills they’ve offered is legislation that would end the Biden administration’s requirement that foreign truckers transporting goods be vaccinated to enter the United States.

Rep. Marjorie Taylor Greene (R-Ga.) said in a recent Twitter post that truckers “work so hard to deliver food and critical supplies for all people” and are now “bravely taking a peaceful stand for our freedoms.”

Organizers of several convoys told The Epoch Times they don’t plan on going into downtown Washington but an organization called the KNK Foundation filed on Feb. 18 for an event permit, according to a copy obtained by The Epoch Times.

Kyle Sefcik, who filed the application, wrote that the March 1 event would take place in the Sylvan Theater, which sits near the Washington Monument. The “peaceful demonstration,” which will include speakers “against mandates,” will be held in “support of convoys in Canada” and call for lifting mandates in the United States, according to the permit application.

The National Park Service has approved the application.