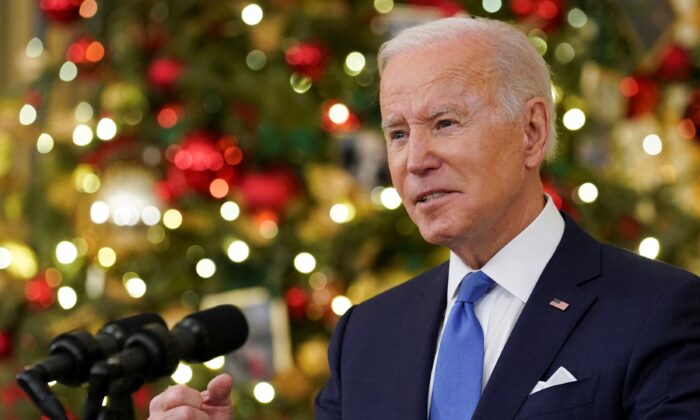 President Joe Biden speaks during a speech at the White House in Washington on Dec. 21, 2021. (Kevin Lamarque/Reuters)
Executive Branch

President Joe Biden’s administration on Dec. 22 extended the pause on student loan payments through May 1, 2022.

The pause was initially announced during the Trump administration in March 2020 because of the COVID-19 pandemic.

The Biden administration extended it twice but was poised to let the pause end on Jan. 31, 2022.

Even though the economy has recovered strongly and unemployment is low, “we know that millions of student loan borrowers are still coping with the impacts of the pandemic and need some more time before resuming payments,” Biden said in a statement explaining the new extension.

“This additional extension of the repayment pause will provide critical relief to borrowers who continue to face financial hardships as a result of the pandemic, and will allow our administration to assess the impacts of Omicron on student borrowers,” Education Secretary Miguel Cardona said.

The extension is a reversal of the administration’s previous stance.

When announcing the previous extension, the administration said the firm date would “allow borrowers to plan for the resumption of payments and reduce the risk of delinquency and defaults after restart.”

The White House had indicated earlier this month no further extensions would be implemented.

The reversal followed a campaign from many Democrats in Congress.

“Thanks to our continued organizing, the pause on repayments is EXTENDED,” Rep. Pramila Jayapal (D-Wash.) added.

The administration will work with borrowers “to ensure they have the support they need to transition smoothly back into repayment and advance economic stability for their own households and for our nation,” Biden said.

The pause enables people with student debt to forgo payments. Interest doesn’t accrue during the pause.

According to the Department of Education, the pause so far has saved 41 million borrowers tens of billions of dollars. Another $5 billion will be saved each month moving forward, the agency stated.

Democrats have also pressured Biden to deliver on his promise during the 2020 campaign to cancel at least $10,000 student debt per person, to no avail so far. However, the administration canceled nearly $7 billion in loans in March, including forgiving the debt of some 72,000 borrowers.

Psaki said over the summer that Biden can only pause or delay payments and only Congress can unilaterally cancel them.

Some senators disagreed, urging Biden to issue an executive order forgiving a certain amount of debt or all debt.

Jack Phillips and Nick Ciolino contributed to this report.